I hope everyone enjoyed the holiday weekend and stayed warm. If anybody has anything in particular they'd like to be highlighted, please don't hesitate to tell me.

This Saturday was World Radio Day, and it was used to celebrate broadcasting’s potential to save lives in times of emergency and disaster. Rumors and misinformation can be disastrous in times of crisis. Program manager for BBC Media Action in Sierra Leone, Musa Sangarie, writes a reminder of how big a difference radio broadcasting made in Sierra Leone during the Ebola crisis. It also provides a platform for local voices to be part of both the discussion and the response. ♧

A woman has passed away who worked extremely hard to make personal difference to the lives of Congolese women and their families her whole life. Rebecca Masika Katsuva was a Congolese human rights campaigner who set up refuge centers and an organization to help the victims of war and rape. In 2010, Masika was given the Ginetta Sagan award for women’s and children’s rights by Amnesty International, along with a grant of $10,000, in recognition of “one woman’s ability to make a tangible and positive change among chaos and insecurity," which is an inspiring tribute to what the global health field can be. ♧

With Zika progressing, research is showing that climate change may be a major contributor to the fast spread. Warmer and wetter conditions facilitate transmission of mosquito-borne diseases, which may have added to spread, says lead climate change scientist. ♧ As people are trying to find solutions to Zika, the talk of genetic modification of mosquitos is progressing to a conversation about eradicating them altogether. The question is whether it's dangerous to talk about ‘editing nature’, or if its actually the best idea. Mosquitos also spread Malaria, Dengue Fever, and other serious illnesses that people around the world agree we'd be better off without. Today, according to the Gates foundation, the diseases they carry kill about 725,000 people a year, 600,000 of them victims of malaria. ♧ 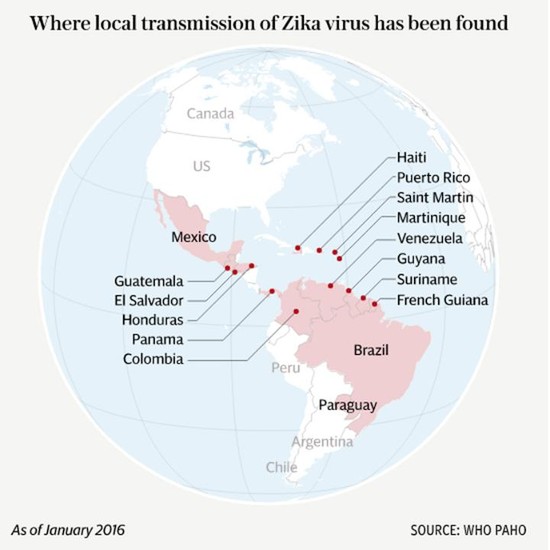 Researchers at the Overseas Development Institute are talking about the ingenious solutions created by people to address local problems, which come from non-experts through trial and error, and are “good enough” rather than perfect. In their words, from 'potatoes to solar panels', these local innovations are the key to resilience. The people who are most vulnerable often lack the resources to deliver scientifically robust solutions. Our world demands autonomous innovations that are flexible, frugal and instinct-driven, to function through disturbances. They are asking for an increase in recognition so that grants could support programs that create a positive environment for autonomous innovation, while loans and equity investment could scale up innovations. Competitions and challenge funds could also find and support the best new ideas, but they need to be accessible to the local innovators. ♧
The U.N. Secretary General has released a major report in anticipation of the world humanitarian summit in May. Ban Ki-moon says, " the summit must spark a process of renewal in the way the organization works across mandates and responsibilities." Ban calls on world authorities to show courageous leadership, act early, invest in stability and include those affected by conflict in drafting policies. Since Ban first called for a humanitarian summit in 2012, more than 23,000 people in 153 countries have been consulted on priorities. Drawing parallels with a 1941 London meeting of allied governments, whose declaration in support of diplomacy and peace was an early precursor of the UN charter, Ban says the world is approaching a similar point in history and needs to reaffirm its commitment to humanity. “We must remember the promises we made and respect the rules that we have agreed to. We need to restore trust in our global order and show those millions left behind in conflicts, in chronic need and in constant fear the solidarity they deserve and expect from us.” This call for renewed dedication leading up to May's summit will hopefully have some traction. ♧

France's U.N. Ambassador Francois Delattre said Wednesday that a new resolution "coming soon" will be aimed at helping to reduce violence and tensions, to spur a "truly inclusive inter-Burundian dialogue," and to promote respect for human rights. He said deploying U.N. police to Burundi "is potentially a productive idea." ♧ Rwandan foreign minister, Louise Mushikiwabo, said that Rwanda will immediately begin working with partners in the international community to relocate refugees from Burundi. ♧

A ‘bionic spine’ could enable paralysed patients to walk using subconscious thought! The new device is the size of a small paperclip and will be implanted in three patients at the Royal Melbourne hospital in Victoria next year. ♧

Have a lovely week everyone.

Follow Sonja Eagle
Contact Sonja Eagle
Embed code is for website/blog and not email. To embed your newsletter in a Mass Notification System, click HERE to see how or reach out to support@smore.com