The One and Only

The One and Only

The Statue of Liberty's Features

To get to the crown of the Statue of LIberty, you have to climb 363 stairs! Inside the crown, there are 25 windows that you can look out of to see all over New York City. The pedestal and statue costed $870,000 in 1880 prices.

Have you ever wondered what the tablet in her hand says? It says "July 4th 1776" in Roman numerals, the date America became independent from Great Britain. Did you ever notice the broken chain around her foot? It's a sign to show how America broke their chain with Great Britain. The seven spikes on her crown represent the seven continents and seven seas. So, the next time you look at the seven spikes, think of the seven continents and seas.

Lady Liberty looking out on the ocean 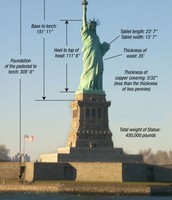 A diagram of the statue

A photo of Lady Liberty's head

The idea of the Statue of Liberty was born by a man named Edouard de Laboulaye. He wanted it to be for America's 100th birthday as a present from France. He decided to ask for donations from French and American people, instead of money from the government, because they were still recovering from war in Europe.

Laboulaye asked his friend Frederic-Auguste Bartholdi to build the statue. He agreed to do it. Bartholdi was inspired to build Lady Liberty from other classical buildings he saw in his past. Bartholdi made the face to have somewhat of a resemblance to look like his mother. He also put seven spikes on the crown to represent the seven continents and seven seas.

Bartholdi traveled to New York to ask for donations. While he was on the ship to New York, he found a spot for for the statue. He decided to put it where it would welcome sailors. Construction started on Lady Liberty once Bartholdi returned back to France in 1881. 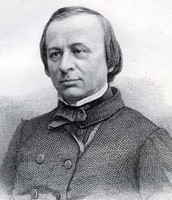 A picture of Edouard de Laboulaye` 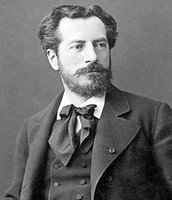 A picture of Frederic-Auguste Bartholdi

Lincoln's Memorial vs the Lady of Liberty

I know, I know, you're probably thinking that the Statue of Liberty and the Lincoln Memorial have nothing in common. But, it is true they share a few similarities.

One similarity they have is that they both something on them that represents something else. For example, the Statue of Liberty's seven spikes on her crown stand for the seven continents and seas, and the Lincoln Memorial has thirty-six columns for the thirty-six states there were when Lincoln died. They are also both statues of people. Lasty, they both signifie liberty or freedom, Lady Liberty represents their freedom from Britain, and Lincoln's Memorial is to remember the president who freed slaves. 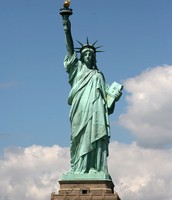 Lady Liberty Looking at the camera

The Lincoln Memorial from far out 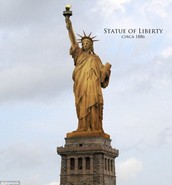 The Statue of Liberty is Green, Why?

We Have Lady Liberty Because...

About 90 years later, many French people wanted to give America a gift for their 100th birthday. France wanted it to be from one people to another, not one government to another, so they got money from French and American people. The first thoughts were by Edouard de Laboulaye. That's how we got Lady Liberty.