The Impact Of Watergate

The Impact Of Watergate

President Richard Nixon tried to wire tap phones and steal important documents from guests staying at the Watergate Hotelier in the year of 1972. After several burglars got caught, Nixon attempted to hide his involvement with the burglars. But when all evidence suggested that Nixon was the head of all the burglaries, he resigned from office and his successor, Gerald ford, immediately pardoned him.

A president resigned from office. Congress tried to limit the presidents power.

People started to not trust presidents. 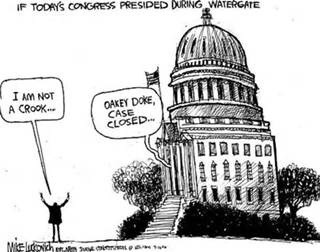