"architect of the modern short story"

"architect of the modern short story" 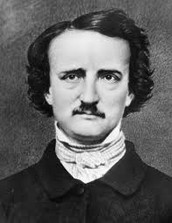 Edgar Allan Poe, known as the architect of the modern short story, spent his life writing brilliant poetry as well as short stories that influenced French Symbolism and altered the direction of modern literature. When Poe was born both of his parents were professional actors in Boston. At the age of three his parents death brought hardship and sadness to his life. Soon after Poe went to live with John & Frances Allen where they sent Poe to the best boarding school. There he excelled academically. Constant grief between Poe and Allen, because of Poe getting kicked out of boarding school, started to deteriorate their relationship. Poe then left the care of Allen and enlisted in the United States Army. Poe's fame rose slowly. Throughout his life in and out of the army he wrote short stories and poems that had been published but not recognized by many. After the Army he went into Military service but was soon forced out because of financial problems. Continuing to write he became famous for his deep writing with a view of a dark twist. Having much grief over his wife Virginia's death his life long alcohol and depression got worse. Poe died of "acute digestion of the brain" and a small case of rabies on October 3, 1849. (poets.org) 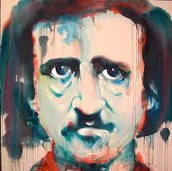 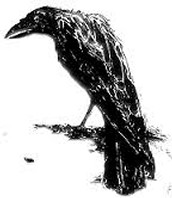 Edgar Allan Poe's "Alone" symbolizes the way he viewed his life opposed to everyone else's. Suffering from his parents death at a young age changed the way he grew up essentially. In Alone he talks about how compared to society and the other people around him he is so different. Through repetition of the word "my" he reveals that it is the way he is feeling. Emotionally and physically it is changing him and he doesn't know how to deal with it but knows there isn't a thing he can do to change the circumstances. With the use of rhyming you can see both sides of the spectrum; "from the torrent, or the fountain- from the red cliff of the mountain." He is saying here that everything from something small to the worlds' biggest creation doesn't begin to describe how alone he is feeling. Near the ending the poem alludes to Heaven as well as the demon or devil. Showing that he tries to think of better and he knows it is out there it is often easier to see things the way you feel inside. With the simple word choice but amount of emotion Poe put into his writing of Alone you can kind of see a little bit of pain his whole life was based upon. 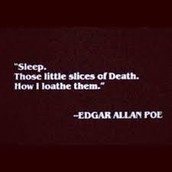 In comparison to "Alone" Poe's poem "A Dream" continues to tell of his constant fight dealing with depression and wanting a better life. In "A Dream" his dreams symbolize him escaping his current state of mind. From the real world to his dreams life seems to be easier and better in his dreams. Once he returns back from a dream he sees not only how unhappy the world is but how much less he wants to be there. His heavy usage of rhyming and imagery in each stanza helps the reader feel more connected to the events that are happening. "A Dream" shows readers that even in the event of a bad day or a bad life doing little things, like dreaming, to escape the real world for even a small amount of time could help.

A Dream by Edgar Allan Poe : The Poetry Foundation

www.poetryfoundation.org
In visions of the dark night / I have dreamed of joy departed / But a waking dream of life and light / Hath left me broken-hearted. 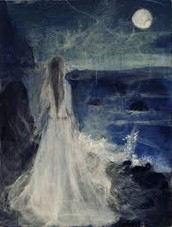 Poe's beautiful writing of "Annabel Lee" gives a glimpse at the love and compassion he so proudly showed toward his dear Annabel Lee. In "Annabel Lee" Poe confesses his admiration for none other than Annabel Lee and their adventure at life together in their kingdom by the sea. The allusion to Heaven and the angels shows readers that the angels were not happy about this love between these two human beings. The angels had a bit of jealousy toward Poe. Through personification of the chilly winds killing Annabel Lee it shows how greatly the angels wanted Poe's happiness taken from him. Poe is sad of course but he doesn't want to let the angels, the demons and the elders get what they wanted. He saw the brighter side of things and still believed his dear Annabel Lee was still with him. Things all around him reminded him of Annabel Lee and he was grateful for that. Although they thought that continuing to take things away from Poe he never once showed to anyone how he was really feeling and was only ever strong on the outside.

The Valley of Unrest

The "Valley of Unrest" describes the hardship of continuous battle between life, people and yourself. The constant mental and physical strain on things never being still, something is always happening, breaks people down. The allusions to the stars watching over them and the flowers are them wanting God to be there. Something happens and the flowers dew are people's tears. Poe's tone and mood in "Valley of Unrest" gives off the feeling of anxiousness and wonder if things will get better. It also connects the feeling of Poe's whole life, continuing to tell of his hard life and how he felt. Nothing came easy for Poe and things never stopped happening to him like the how the valley was never restlessness or motionless.

The Valley of Unrest by Edgar Allan Poe : The Poetry Foundation

www.poetryfoundation.org
Once it smiled a silent dell / Where the people did not dwell; / They had gone unto the wars, / Trusting to the mild-eyed stars,

Follow Chloe Jones
Contact Chloe Jones
Embed code is for website/blog and not email. To embed your newsletter in a Mass Notification System, click HERE to see how or reach out to support@smore.com