Caldwell is using Smore newsletters to spread the word online.

Get email updates from Caldwell: 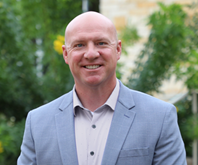 We have had an amazing start to the school year! While we have a great deal to look forward to in the days ahead, this month I would like to recognize our Board of Trustees for something that often goes unnoticed.

At the August 22, 2022 Board meeting, the Board voted to both reduce the tax rate for the Caldwell ISD community by six cents and pay down the debt of the District by almost one million dollars.

This continues a long track record of responsible stewardship and sound fiscal management, producing balanced operating budgets so that tax-payer dollars are focused on both the immediate needs and the long-term goals of the District. Because of this forward-looking leadership, Caldwell ISD remains well-positioned to support students and student-focused programs in the future.

THANK YOU CISD SCHOOL BOARD FOR ALL YOU DO 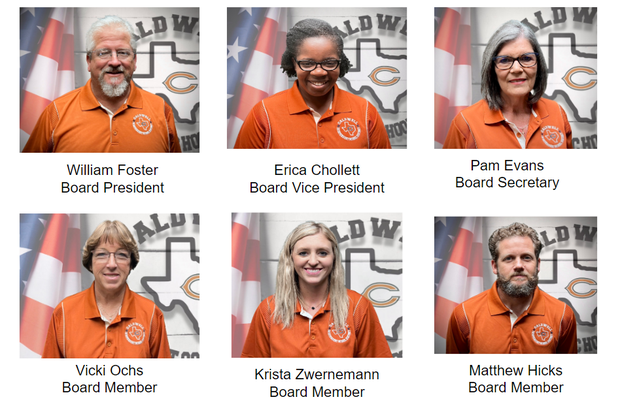 Welcome to the CISD School Board

As of August 22, 2022, The CISD Board of Trustees voted to appoint Gregory Cook to fill the empty seat on the Caldwell ISD School Board.

CISD welcomes you, and thank you for your service! 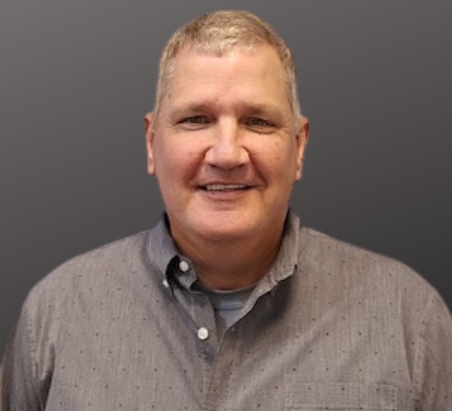 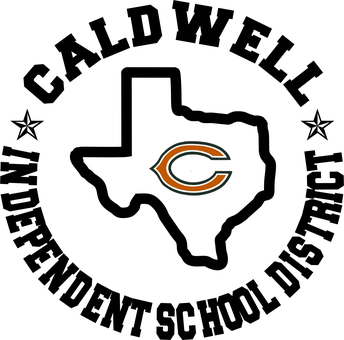 The regularly scheduled CISD Board meeting was called to order at 6:00 PM followed by the pledge and prayer.

*District /Accountability Ratings Review Public Hearing - Susan Groce went over the vision of Caldwell ISD, TEA Domains, The Overall Performance Summary, and the Overall District Rating of an A. Each campus was highlighted for their individual rating along with distinctions at the elementary, junior high, and high school. Click HERE to view the full presentation.

Recognize Students and Staff - There was no student or staff recognition.

Public Input - Carol Bardin and Russ Bardin spoke about their family’s homeschooling journey and their desire for the District to allow more homeschool participation in the future. Janice Easter, Mayor of Caldwell, gave public comment about how it is the city’s desire to continue the long-standing partnership between the City of Caldwell and Caldwell ISD.

*Mrs. Larea Gamble, Principal of Caldwell Intermediate, introduced Nicki Drgac as the new Dean of Students at Caldwell Intermediate School. Mrs. Gamble stated that Mrs. Drgac has served as teacher, District Testing Coordinator, Campus Testing Coordinator, Counselor, and has been in education for over 20 years, and that she has a heart for students and staff. Mrs. Gamble stated that Mrs. Drgac is an integral part of the the CIS campus and has been very impactful in helping grow the campus culture and improve the levels of student performance.

*Dr. Barton gave recognition and gratitude to law enforcement for their continued presence on our campuses and consistently being engaged with our students.

*Demographer Information Report - PASA - Kris Pool and Angela Fritz gave the presentation from PASA. Click HERE for the full presentation about the projection of the future growth of Caldwell and the effects to Caldwell ISD.

*Construction Update - Rusty Wallace gave a brief recap of the tennis court project. The restroom/concession facilities are almost complete. The fencing is complete. The canopy and bleachers are on site and will be installed at the end of the project. The project can all be completed within the next two weeks except for the resurfacing. The completion date is set for September 16.

*Finance Reports - Heather Escalante gave a report on the district finances through the month of July. The General Fund has only collected 0.05% of its budgeted revenues. Local Revenue, primarily made up of local tax revenue, will not start being collected until January. For State Revenue, because the District is a “Payment Class 3” we will receive 45% of our estimated entitlement in September, 35% in October, and then the remaining balance in August 2023. For the Child Nutrition budget, there is very little activity shown for the month of July due to no meals being served. In September, the District will begin reviewing the month of August to see the impact of the removal of universal free breakfast and lunch.

*Consideration and Approval of a Resolution by the Board of Trustees of the Caldwell Independent School District Providing for the Defeasance and Calling for Redemption Certain Currently Outstanding Obligations; Directing that the Board Secretary, or Designee, Effectuate the Redemption of the Obligations; Authorizing the Execution of an Escrow Agreement; and other Matters in Connection Therewith - Last January, the Board approved TGL as the new Financial Advisor for the District. Due to this change, the District was able to strategically plan for the future. As a result of this planning, The District has the opportunity to pay down additional bond debt. The Board approved the defeasance of certain outstanding obligations of Caldwell ISD.

*Meeting Minutes - The Board approved the minutes.

Action resulting from Executive Session - The Board approved Gregory Cook as the newest Board of Trustee.

Grades K through 3rd primarily use the Core Essential Values curriculum. This curriculum focuses on a core value word of the month and involves everyone in the school to implement the word and demonstrate it in their words and actions. Core equips students, staff, and families to SAY IT, KNOW IT, SEE IT, AND BE IT each month. The word for August is HONOR! 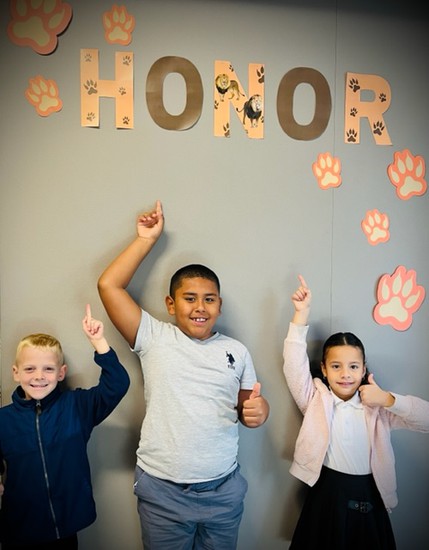 Each month our students, grades 4-12, learn about what it means to have good character through our Character Strong curriculum. The word for August is RESPONSIBILITY. Caldwell Junior High students talk about what RESPONSIBILITY means to them.
https://www.youtube.com/watch?v=Uit-QWIu2Jc&t=8s 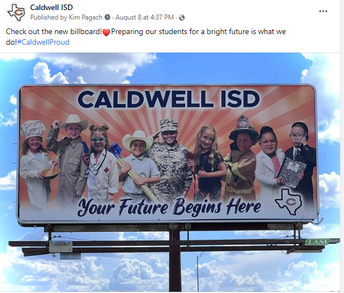 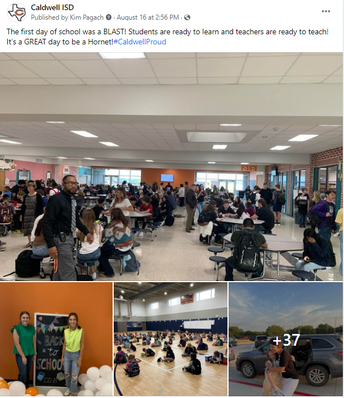 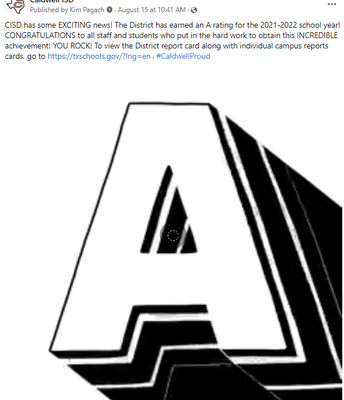 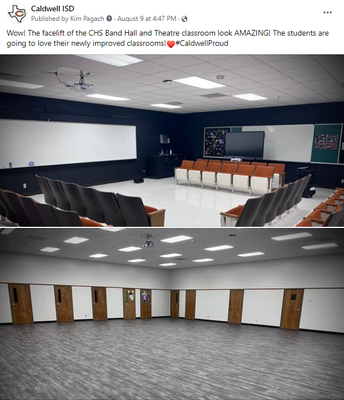 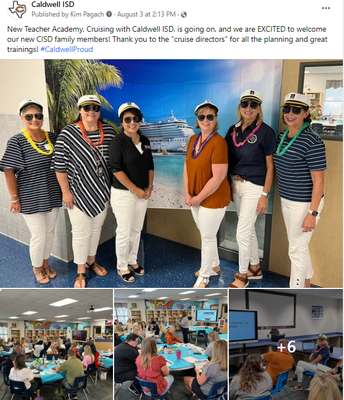 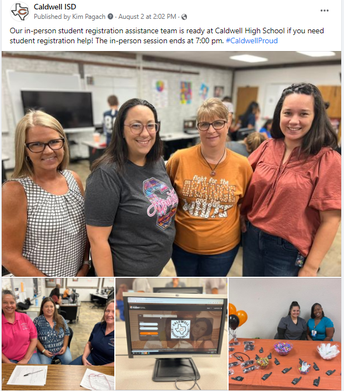 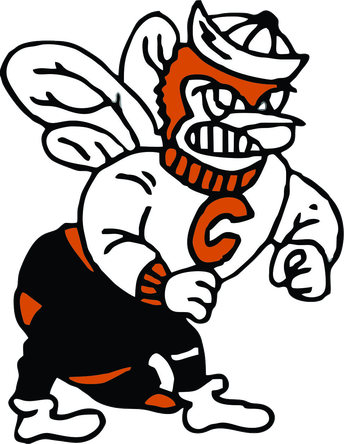 Caldwell Independent School District was officially established as a public school district in 1923 and serves the northern and western portions of Burleson County. In 1990, Caldwell ISD became the largest school district in the county that serves just under 2,000 students and is comprised of four campuses: Caldwell Elementary

Caldwell ISD is the home of the Hornets. The official colors are Texas orange and white. Texas UIL classifies Caldwell ISD Hornets as a 4A district.

Caldwell is using Smore newsletters to spread the word online.

Follow Caldwell ISD
Contact Caldwell ISD
Embed code is for website/blog and not email. To embed your newsletter in a Mass Notification System, click HERE to see how or reach out to support@smore.com
close