In physics, a force is said to do work if, when acting, there is a displacement of the point of application in the direction of the force.

Work transfers energy from one place to another or one form to another. See work energy theorem to the right

In physics, power is the rate of doing work, the amount of energy transferred per unit time. Having no direction, it is a scalar quantity. In the International System of Units, the unit of power is the joule per second (J/s), known as the watt in honor of James Watt, the eighteenth-century developer of the steam engine.

The principle of work and kinetic energy (also known as the work–energy principle) states that the work done by all forces acting on a particle (the work of the resultant force) equals the change in the kinetic energy of the particle. Work = ΔKE 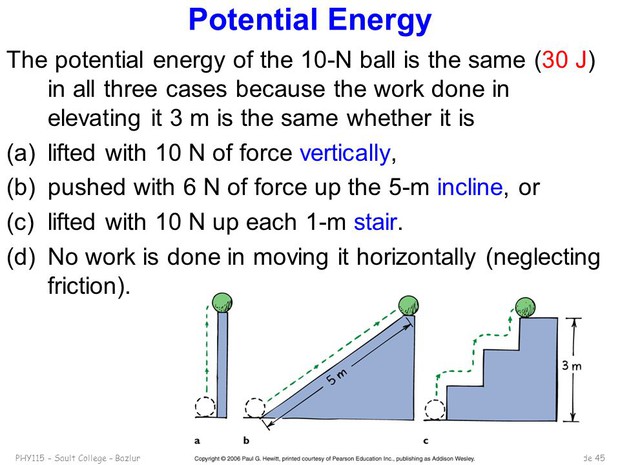 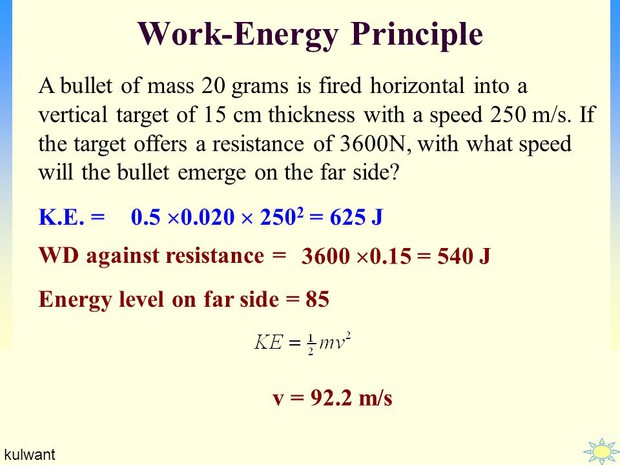 We Finally Know How The Pyramids Were Made! 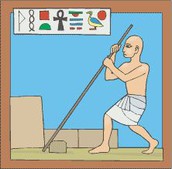 What is a simple machine?

Simple machines make work easier by multiplying, reducing, or changing the direction of a force. The scientific formula for work is w = f x d, or, work is equal to force multiplied by distance. Simple machines cannot change the amount of work done, but they can reduce the effort force that is required to do the work! For the inclined plane and lever, less effort (effort force) is needed to do the same work because the distance is increased. By using simple machines, the Egyptians were able to construct the pyramids. 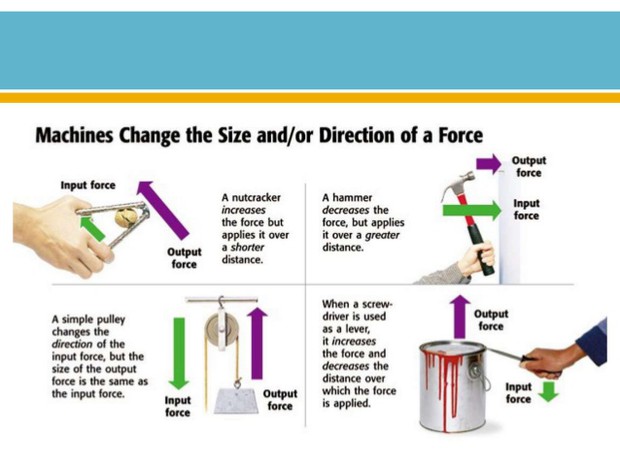 Inclined planes decrease the amount of force needed but more distance is required.

By pushing an object up a slanted surface, one can move the object to height h with a smaller force than the weight of the object.

The resistance force Fr =mg, the weight of the object. It takes work (Fxd = mgh) to overcome that resistance force and lift the object to height h. By doing work on it we give it gravitational potential energy mgh. By exerting force (effort) to push the object up the incline, we do the same amount of work in the ideal frictionless case. So setting the work equal FeL = Frh, we arrive at the ideal mechanical advantage Fr/Fe = L/h or Din/Dout.

Another approach to the incline is just to calculate the amount of force required to push the object up a frictionless incline. If the forces are resolved as in the standard incline problem, you find that the required force is Fe=mgsinθ = mgh/L = Fr (h/L) . 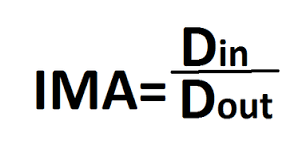 As seen in the picture to the right, AMA is calculated by dividing the resistance force by the effort force. In other sources, you will see these labeled as output force and input force respectively. Resistance force is the WEIGHT of the object to be moved. It is the output force of the simple machine. The input force is the same as the effort force put into moving the object using the machine. This formula for AMA is the same for the lever and the inclined plane.

Another way to calculate efficiency is AMA/IMA x 100 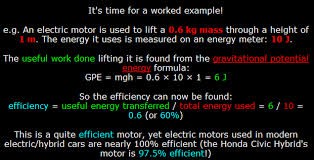 A lever makes work easier by reducing the force needed to move a load by increasing the distance.

A Lever is a simple machine consisting of a rigid bar that rotates about a fixed point, called a fulcrum. The lever makes doing work easier by reducing the force needed to move an object. In order to reduce the force needed, the distance over which the force is applied must be increased. To increase this distance, the load to be moved must be close to the fulcrum and the force must be applied far from the fulcrum.

A common example of a lever is the seesaw. The human arm is also a lever, where the elbow is the fulcrum and the muscles apply the force.

Just as with inclined planes, terms can be confusing with levers too. 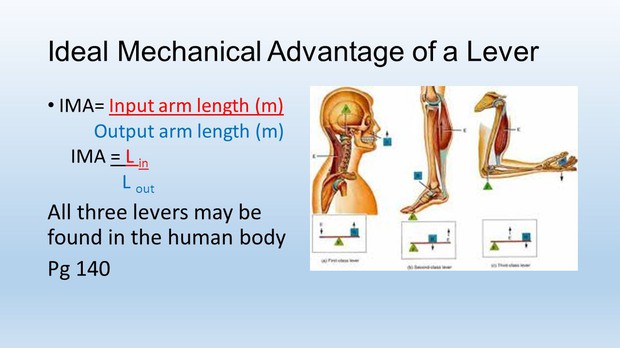 Stonehenge rebuilt by one man with his bare hands

Bishop State Community College, North Broad Street, Mobile, AL, United States moliver@bishop.edu (251)405-4504
Embed code is for website/blog and not email. To embed your newsletter in a Mass Notification System, click HERE to see how or reach out to support@smore.com
close