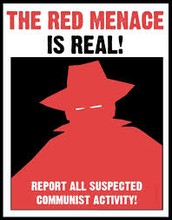 As the Cold War between the Soviet Union and the United States intensified in the late 1940s and early 1950s, hysteria over the perceived threat posed by Communists in the U.S. became known as the Red Scare. (Communists were often referred to as “Reds” for their allegiance to the red Soviet flag.) The Red Scare led to a range of actions that had a profound and enduring effect on U.S. government and society. Federal employees were analyzed to determine whether they were sufficiently loyal to the government, and the House Un-American Activities Committee, as well as U.S. Senator Joseph R. McCarthy, investigated allegations of subversive elements in the government and the Hollywood film industry. The climate of fear and repression linked to the Red Scare finally began to ease by the late 1950s.

Shortly after the end of World War I and the Bolshevik Revolution in Russia, the Red Scare took hold in the United States. A nationwide fear of communists, socialists, anarchists, and other dissidents suddenly grabbed the American psyche in 1919 following a series of anarchist bombings. The nation was gripped in fear. Innocent people were jailed for expressing their views, civil liberties were ignored, and many Americans feared that a Bolshevik-style revolution was at hand. Then, in the early 1920s, the fear seemed to dissipate just as quickly as it had begun, and the Red Scare was over.