The history of Softball

Softball was introduced to people on thanksgiving in 1887 at a football game at Harvard-Yale (Dagenais 1). At first softball was played inside so baseball player’s cold still practice during the winter (Dagenais 1). In softball because the ball was soft unlike a baseball it was fielded with a bare hand (Dagenais 2). The first game of softball was played inside were Hancock drew with chalk a small baseball diamond inside a boat club (Dagenais 2). The end score of the game was 41-40 a close game that lasted an hour (Dagenais 2). After the game Hancock recorded the rules and made the ball much bigger and the bat had a rubber tip that was better for indoors; Hancock was so fond of the game he painted the foul lines on the floor of the boat club (Dagenais 2). In Chicago during the winter baseball was very popular; after winter past in 1889 people began playing softball outside (Dagenais 2). The balls that were used inside were also used outside now they ranged from 10-20 inches (in Diameter) (Dagenais 2).Lewis Rober was very important in inventing softball; Rober was a fireman that needed a way to keep his men busy until a call came in so he marked off a field to play softball on (Dagenais 2). The games were limited to seven innings by Rober because he needed the games to only last an hour while with the same rules while still being competitive (Dagenais 2). The firehouse softball games began attracting many people as many as 3,000; by 1913 people of Minneapolis Park Board adopted softball and softball was now played around the city (Dagenais 3). After a while softball was spread though the upper Midwest and Canada; the first official softball league that was created outside the USA was in Toronto in 1897 (Dagenais 3). When softball was first created it wasn't given an official name so people made up their own like cabbage ball, mush ball or pumpkin ball the names depended on were the game was being played (Dagenais 3). Said by Dagenais “The size of the bat and ball as well as the exact rules changed as much as the name” (Dagenais 3). This means that the bat and ball sizes changed just as much as the name did. In 1926 the game finally took softball when a Denver YMCA official brought the name up for a suggestion (Dagenais 3). In 1933 the first softball tournament

Softball made a huge leap in 1933 when a reporter from Chicago and a salesman of sporting goods made a softball tournament to go along with the world’s fair. Leo Fischer (the reporter), and Michael Pauley (the salesman) invited 55 teams to compete in three tournament divisions: men’s fast pitch, men’s slow pitch (which is sixteen inch softball and is a direct descendant of Hancock’s original game does not allow defensive players to wear gloves,) and women’s. A total of more than 350,000 people watched the games at the field inside the world’s fair grounds. This tournament was what propelled softball onto the world stage. Teams, leagues and tournaments started to pop up in tons of U.S. cities and around the world. During the next seven years, it was estimated that more than five million people played softball. After World War 2, Canada soldiers introduced softball to the Netherlands. In 1939, softball was introduced to Australia. Softball was introduced to the United Kingdom in 1962 when the movie A Touch Of Class was being filmed in London. The first British women’s softball league was established in 1983.

History of the Windmill Pitch

There are a lot of great softball players in the world but some of the most popular are Jennie Finch, Crystal Burstos, Lisa Fernandez, Cat Osterman, and Michele Mary Smith. According to Manali “The most famous softball player Jennie Finch started pitching windmill style at the age of eight” (Manali Oak 2).After years of practice she perfected her softball skills and played in college softball torments; Finch also competed in the Olympics for softball and won a gold metal (Manali Oak 2). Mexican American Crystl Bustos holds the world record of home runs done at the Olympics; she is also was a member of the Olympic softball team in 2008 and was the winner of 3 world cup championships and 3 pan American gold’s (Manali Oak 3). In 1994 Lisa Fernandez and her team were in the Women’s College World Series Championship; after the World Series Fernandez was offered into the US women’s Olympic Softball Team (Manali Oak 4). Fernandez is also a winner of 2 gold medals one from 2000 and another from 2004(Manali Oak 4).Cat Osterman a pitcher for the USA Women’s softball team has a gold and silver medal from summer Olympics; she also pitched 20 NCAA no-hitters on her career and 10 NCAA perfect games in her career (Manali Oak 5). Two-time gold medalist from the Olympic softball team Michele Mary Smith has played for the Japanese Professional softball League starting in 1992; Smith has been awarded the ASA Softball Hall of Fame in 2006(Manali Oak 6). 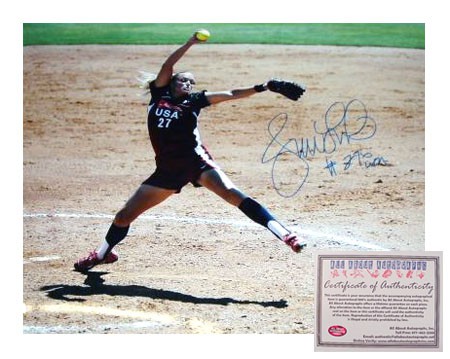 Follow Jackie olson
Contact Jackie olson
Embed code is for website/blog and not email. To embed your newsletter in a Mass Notification System, click HERE to see how or reach out to support@smore.com
close