Night of the Twisters!

By: Ivy Ruckman Also made By: Caroline Alley

Night of the Twisters!

By: Ivy Ruckman Also made By: Caroline Alley 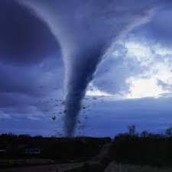 1st the tornado forms then comes and hits the ground.

3rd you're left with the ruble of land and your house.

What happen was that Dan has a little brother named Ryan.Dan hated Ryan well he thought he did.Until the BIG/HUGE tornado came! He ran to Ryan's room, and picked him up and ran to the basement.They went to the shower stall were Arthur was.When the tornado was gone they climbed up from the basement through a hole. Stacy ( one of Arthur's sisters.)found them. Dan huged Ryan so much.Then they went to find Linda Hatch (Dan's mom.)they couldn't find her, but then they herd her voice. Dan turned around and saw his mom. she took Ryan and got on a bus and went to the K- Mart. Dan,Stacy,and Arthur went to find Mrs. Smiley. They found her in her basement. The stares were gone so...Dan and Arthur got a bed spring and used it as a latter. Mrs. Smiley got out and went on a bus to K- Mart.Then a policeman came and took them to the police station. Then another tornado came. After the tornado passed officer Kelly said he had glass in his eyes. So Dan had to drive them to the police station. They had to sleep there in the women's area. In the morning Stacy's and dad came and found them. Dan walked to the piles of ruble that used to be his house and neighborhood. Then...a truck came and piked him up it was his dad. Also his mom and...Ryan. Then they all went home. Well their grandma's house.

One problem is that Ryan was stuck in his mobile.So Dan yanked the mobile down and ran to the basement. The 2nd problem was that Dan and Arthur couldn't find how to get Mrs. Smiley out of her basement. But then Dan saw a old bed spring and used it as a latter.

There were a lot of settings and places in this book. Here they are. There was Dan's house, Arthur's house, Mrs. Smiley's house, Dan's grandma's house, K-Mart, The Police Station, and most important Grand Island, Nebraska.

2.One major river in Nebraska is the Platte River.