The difference between a Developed and Developing nation

The difference between a Developed and Developing nation

There is a large difference between what is considered as a "developed" and a "developing" nation. One of the main and obvious reasons is the wealth of the nation.
If a nation is very wealthy and is in no debt to other countries, that nation is better off in the long run, and then the nation will go up in the chain. But if a nation is in debt, and doesn't have enough money, it might go towards a developing nation.
So, the difference between the two types of nations are the differences of what makes the nation what it is. Whether it is education, employment, economical, or geographical differences.

What is an Indicator?

An indicator is a certain aspect of a nation that depicts whether that nation is a developed or a developing nation. For example, one indicator is "improved water source". Depending on whether or not that nation has good water to drink, that percentage goes to that indicator and that contributes to the overall decision.

- Low Health Expenditure of $77 (US currency)

- The seperation line between "wealthy" and "poor" is very defined

As we can see, Indonesia is not a country, but a nation of different islands bunched together. It is located above Australia (North-West) and is in teh Indian Ocean)

In recent years, the poverty in Indonesia has reduced, but there still are many people who live out in the streets.

While there is poverty in Indonesia, there is still a good amount of wealth and beauty, where buildings come in. There are many palaces, with a great deal of beauty behind them.

Australia: A place of wonder, desert and wealth. Australia is a developed nation. With a low population compared to our huge land area ( Around 7.5 million km squared) and our isolation from other developed countries, Australia has a very good reputation for it. Indicators that contribute to it's status include:

- Around 3/4 of the population technologically advanced

- Health Expenditure of almost $5000 per person

Australia is located between the Indian Ocean, the Tasman Sea and the Caspian Sea. Australia is it's own continent.

Australia has a unique variety of wildlife and flora. Australia holds the only mammals that lay eggs and have some of the deadliest species of animals on the face of the earth.

When some nations think of Australia, they think of desert and everybody riding kangaroos. This is kinda wrong (well, the kangaroo bit). Even though quite a bit of Australia is desert, Australians mostly (80-85%) live on the coast in suburban/city areas.

GRAPHS: Comparisons Between The Two Types Of Nations 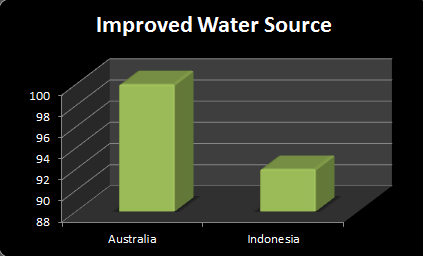 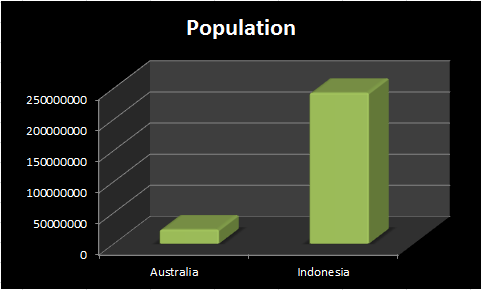 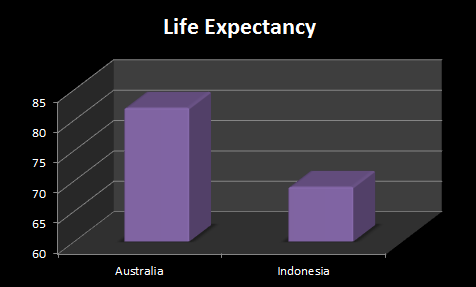 Well, with the information gathered on a developed and a developing nation, we can tell that there is a large difference in the way people live in those types of nations. Due to the graphs, we can tell that some indicators have dramatic differences between the two nations and that Australian would be a developed country, while Indonesia a developing country.
So, just because two nations are close to each other, it doesn't mean that they are in the same status.