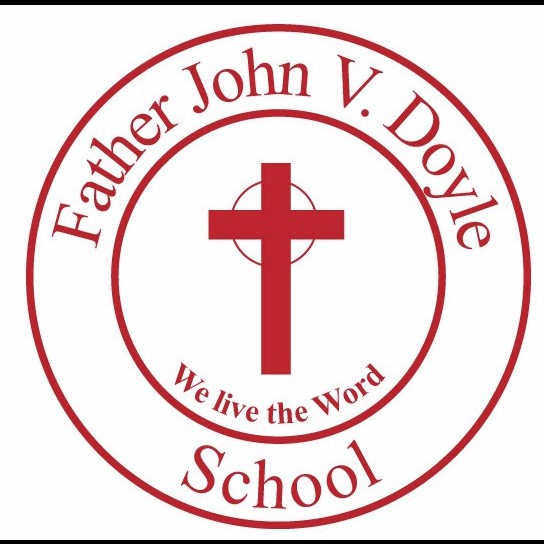 The Peace of Christ be with you. As I sit and write out this letter to you, it is Laetare (Rejoicing) Sunday, March 31, the Sunday when the priest wears Rose (not Pink) Vestments, and the Church rejoices that Lent is coming to a close, and the Day of Resurrection draws near. And this Laetare Sunday, I am certainly rejoicing in an extra special way!

I am happy to introduce to you Kevin Peloquin, who on July 1, 2019, will replace the retiring Jae Smith as principal of Father John V. Doyle School. Out of all who applied and were interviewed for the position, Kevin was the first choice of the eight member principal screening committee, which consisted of two principals of Rhode Island Catholic Schools outside the Kent County area, a Catholic Schools Office employee, as well as five members of our parish with backgrounds in the legal profession, human resources, military, and finance, all of whom are long time supporters of Catholic education and Father John V. Doyle School. And after interviewing all the candidates that the screening committee recommended to me, Kevin was my first choice as well, and thankfully, he accepted the job!

In her recommendation letter, Sr. Maria Francesca states: “(As Dean of Academics,) Kevin has proved himself a collaborative leader who is able to draw a team of educators together . . . He is dependable and consistent, and has worked tirelessly to better our school both in its academic rigor and its fidelity to our Catholic mission. Kevin understands the art of teaching and is well poised to help teachers to grow in their profession. . . As Academic Dean, he mobilized teachers and all stakeholders in developing a clear curricular vision of our school. Kevin demonstrates excellent communication skills with the skills and personality to be a leader. In addition . . . Kevin is a devoted Catholic whose love for Christ brings a life and joy to his leadership which is invaluable. Without reservation, I recommend Kevin for the position of principal at Father John V. Doyle School. I am confident that his personal drive, intelligence, desire for professional excellence, and dedication to the mission of Catholic education will prove him an asset to your school.”

In addition to working in the areas of teacher professional development, curriculum, and STAR data analysis, Kevin has also been responsible for Title Funding as well as student discipline for grades five through eight. The Superintendent of Catholic Schools for our Diocese, Dan Ferris, praised Kevin for his delicacy in handling difficult disciplinary issues, and the Diocesan Education Coordinator, Jack Wright, told me that Kevin does an excellent job in making sure that his school district gives St. Pius School in a timely manner all the Title Funding they are eligible for. Also, since 2013, Kevin has been the director of the school drama club, which this year put on the Wizard of Oz at the McVinney Auditorium. Finally, for the past 10 years, Kevin has volunteered as a High School Confirmation Retreat Leader for the Parish he grew up in.

When Mrs. Smith told me she was retiring a few months ago, I must confess that I immediately thought of Kevin for the position. I have known Kevin for many years, as all throughout high school and college, he dated Grace Keating, who’s family was very active at St. Joseph’s Woonsocket where I was assigned the last 15 years. Actually, Grace’s mother was for many years the secretary at Good Shepherd School, and Grace’s father, Kieran, is the lead singer of the Irish band I’ve had for the past 14 years, that played at our parish this St. Patrick’s Day! After graduating college, Kevin and Grace were married at St. Joseph’s, and I officiated at their wedding.

While I do have a prior relationship with Kevin, I tried very hard not to let that cloud my objectivity in choosing the best candidate for principal of Father John V. Doyle School. I believe the facts mentioned above make a clear case: Kevin has been praised as an outstanding choice for our new principal, not only by me, but also by all the members of the independent screening committee, by the Catholic Schools Office, and by the faculty of St. Pius School.

But you don’t have to take my or their word for it — you can come and meet Kevin yourself, next Sunday at the Open House! Thankfully, St. Pius isn’t having one that day, so Kevin (or, as the kids will be calling him, Mr. Peloquin) is available to be with us from 9am—11am, next Sunday, April 7, at Father John V. Doyle School. As Kevin will be finishing up the year at St. Pius, this will be a golden opportunity for you, your child, and everyone else, to meet our wonderful new principal before the school year ends!

In conclusion, I am confident that Kevin has the strong leadership qualities and personality needed to help continue to grow Father John V. Doyle school into a vibrant, innovative, solidly Catholic school, that will be competitive with the other Catholic Schools in our region, and that will draw many new parents in the years ahead to “Discover the Doyle Difference” and enroll their children in our school.

I want to personally thank all the members of the screening committee who put much time and effort into getting us a principal, as well as the Diocesan Catholic Schools Office, who was also very helpful. I also want to thank all the children, parents, faculty of our school, and all the Ss. John and Paul parishioners, who for many weeks have been praying for a new principal. Please continue to pray for Kevin, and for the continued success of Father John V. Doyle School!

Follow Kevin Peloquin
Contact Kevin Peloquin
Embed code is for website/blog and not email. To embed your newsletter in a Mass Notification System, click HERE to see how or reach out to support@smore.com
close