On 9-26-14 the Piedmont Academy Cougar Varsity Football defeated Windsor. The final score to the game was 49-14. The leading scorer for the Cougars was Hunter Knox. Knox had 229 yards on 22 carries and scored 4 rushing touchdowns. Knox also had a touchdown on a Kick return. The Cougars leading defensive players were Chris Cain, Wyatt Galloway, and Mack Brady. Cain had 10 tackles. Galloway had 9 tackles and 1 pass breakup. Brady had an interception that he returned for a touchdown. Michael Edwards also an interception.

For the year so far in rushing, Hunter Knox has 101 carries with 946 yards and over 15 touchdowns. Jeremiah Dave and Zach Beggs both have 2 touchdowns. Ben Davis, Michael Edwards, Mack Brady, Hank Strickland, and Gaven Edge all have 1 rushing touchdown a piece. Zach Beggs has completed a total of 31 passes for 664 yards, 8 touchdowns, and 7 interceptions. On the Receiving end, Hank Strickland and Michael Edwards have 3 touchdowns a piece. Wyatt Galloway and Jeremiah Dave have also each had 1 receiving touchdown.

Leading the Defensive side is Jeremiah Dave with 38 tackles, 1 sack, and 1 Forced Fumble. Chris Cain has 25 tackles, 6 Tackles for Loss, and 2 sacks. For kicking, Chase Young is 32 for 32 on Extra Points. 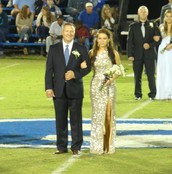 Parker Kelly before being chosen as Homecoming Queen. 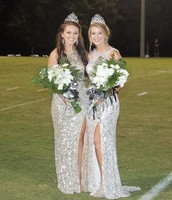 Parker Kelly(left) and Cheyenne Galloway(right) after Parker being named as Homecoming Queen and Cheyenne as Miss Cougar.

30 Students and Faculty at Piedmont Academy where asked, "In your opinion, should illegal immigrants be offered amnesty or sent back to where they came from. Below are the Results.