"The Jewel of the Mediterranean"

"The Jewel of the Mediterranean"

The currency of Cyprus is the Euro.

The biggest city also happens to be the Capitol city, Nicosia.

It is a very hot place, so make sure to bring light clothing, bathing suits and sunblock!

Came in on August 16, 1960 in the Zurich and London agreements

Located on the Northernmost point of Greek Cyprus.

3 Best Places to Visit in Cyprus

Tomb of the Kings

Admission is 2.50 Euro per person

This is a world heritage site

Located on the shore, these ancient tombs have been here from the Hellenistic and Roman periods.

Although is says "Kings" it was given that name as a result of the size and importance of the place and its people.

Located at Ayia Napa,
Nissi beach is one of the most famous beaches in Cyprus

Still being excavated to this day. 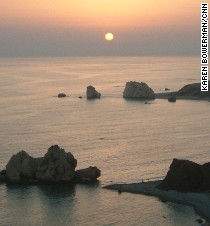 www.cnn.com
Rich with archeological riches, it's also the original island of love and home to the world's oldest wine.

www.cyprusflag.net
The flag of the Republic of Cyprus

countrymeters.info
Live statistics for population of Cyprus. Current population (estimated population data for 2016) and historical data for over 50 past years. Live births and deaths today and since the beginning of the year, net migration and population growth.