40th President of The United States

40th President of The United States 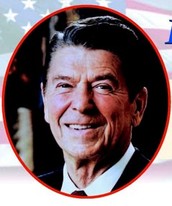 Ronald Reagan's father was an unsuccessful salesman with a serious drinking problem. Ronald Reagan's mother was a farmer who raised Ronald and his older brother, Neil, in the Disciples of Christ Church despite their father's Catholicism. The family moved often, sometimes for new jobs , or after Ronald's father had been fired because of his drinking. In 1920 they moved to Dixon, Illinois, where Ronald Reagan's dad became the part owner of a shoe store.

Ronald Reagan was an outgoing, optimistic, popular, and apparently happy kid despite the problems of his family. He was interested in sports since he was young and really liked football and swimming. He was a hardworking and very successful student. As a teenager, he worked during the summer as a lifeguard at the swimming area of the local river and put aside a lot of what he earned for his education. 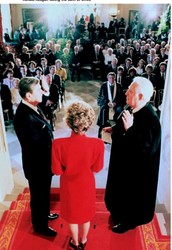 Reagan acted in more than 50 feature films between 1937 and 1964. Then, he decided to give up acting and campaign for Republican candidate Barry Goldwater. In 1966, Reagan was elected governor of California, and stayed governor until 1975, when he ran for president but lost to Gerald Ford. In 1980, Reagan defeated president Jimmy Carter and entered into office as a Republican, with much of congress also being Republican.

Reagan's amazing personality helped him to lead national politics in the 1980s in a stunning way. Reagan's high-spirited optimism, and his strong patriotism got him the admiration of even many Americans who disagreed with his policies. He helped restore a large amount of possibilities to public discourse, a belief in America's superiority, and a faith in leadership. It is clear that many Americans felt better about their society and its future in the 1980s than they had a decade before. Nationalism that Reagan proudly promoted reached out through the American culture and became one of the characteristics of the time. 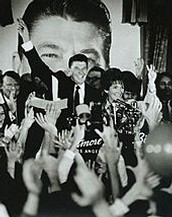 "We are creating a nation once again vibrant, robust, and alive"- Ronald Reagan

(The rest of my quotes were incapable of being saved on Smores, so they will be moved to my Microsoft Words paper) 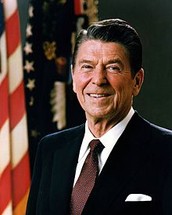 When Reagan left office in 1989, two-thirds of Americans approved of his job performance, which was the highest approval rating of any president since World War II. Americans felt prouder of their country, and of their president. Reagan had the pride and courage to challenge Soviet leader Mikhail Gorbachev to tear down the Berlin Wall in 1987. 2 years after Reagan's speech Mr. Gorbachev did tear down the Berlin wall. Ronald Reagan not only positively changed Americans lives, but also citizens of foreign nations. He embraced freedom in other countries and spoke the minds and hearts of his fellow American citizens.

Ronald Reagan was known as a confident and witty president that reduced taxes in the U.S. and spread Democracy around the world. 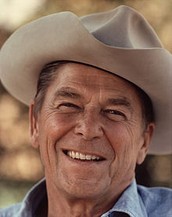 (These quotes about Ronald Reagan were incapable of being saved into my Smores report, so they will also be included in my Microsoft Words paper.)

This source had access to images of Ronald Reagan that I found interesting and relevant to each of my sections. Also, some of the images shown could only be found on this specific source.

This source helped me find out what Ronald Reagan's early career track was like. It also explained his early government jobs and how he got into politics.

This source helped me find out about some of Ronald Reagan's choices for his republican presidency. This source also showed me how some of his decisions our impacted society over time.

This source showed me how his presidency positively effected citizens in other nations. It explained how he positively changed Russian's and also German's lives during his 2 terms.

7) This Day in History: June 12U.S. History In Context

This source had access to quotes about Ronald Regan, and quotes from Ronald Reagan himself. This source also cited who made the quotes, and had quotes I found interesting and positive.

This source explained how Ronald Reagan helped the U.S with it's relationship with Russia. It also stated Ronald Reagan's effects on Soviet Russia.

This source had detailed information on Ronald Reagan's Legacy, and what he did in office. It listed many positive influences that Ronald Reagan had on society.