Facts about Hunger and malnutrition

So there are about 7 billion people in the world. With an estimated 925 million hungry people in the whole world, 1 in every 7 people is hungry ("2012 World Hunger and Poverty"). Hunger kills more people every year than AIDS, malaria and tuberculosis combined (World Food Programme). 13.1 percent of the world's population is hungry. That's about 925 million people who become malnourished every day, eating and taking in less than the standard of 2,100 calories a day (Do Something.org). Compared to the world, about 98 percent of these undernourished people live in smaller developing countries. In these developing countries, almost 15 percent (850 million people) of the population is malnourished ("Hunger Stats"). The U.S. alone produces enough food to feed everyone in the entire world, but one fourth of this food is wasted. 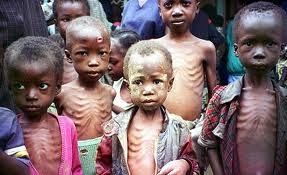 Did you know that the world makes enough food to feed all 7 billion people who live in it, but the people who are actually hungry and need it don't have land to grow food or the money to buy it (Do Something.org). 842 million people in the world don't have enough to eat as a result of homelessness and poverty (World Food Programme). Poverty is the main cause of hunger, and hunger is a main cause of poverty. The poor people who live in smaller countries are greatly affected by poverty leading to hunger and often malnutrition. When people become malnourished, their brain can't think properly and they lose the ability to try and earn money because they can't focus on their job (Do Something.org).

Many of the children who are affected by malnutrition during their childhood experience poor physical growth, immune system malfunctions, and suffer from disabilities as a result of the lack of certain nutrients your body needs to maintain itself ("2012 World Hunger and Poverty") . This explains the fact that about 178 million children under the age of five have poor growth problems. They are stunted and too short for their age (Bread for the World). To prove the extreme results of hunger, the Food and Agriculture Organization of the United Nations estimates that 6 million children die each year because of hunger and malnutrition ("Hunger & Homelessness"). 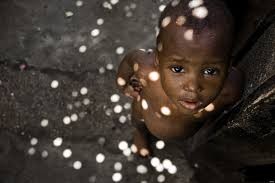 What can you do about it?

Hope for Haiti inspires and creates happiness and joy for children living in orphanages in Port-au-Prince, Haiti who don't have anything. We bring food, toys and other supplies to these children to give them hope and love. You can donate money to towards the cause of creating a brighter, happier future for these children so we can buy the necessary foods and supplies for them. Our organization also provides the option to travel to Haiti to help bring joy to needy children yourself to experience the constant factors of hunger and poverty there. We strive to help create awareness about the innocent lives that are being taken in small countries, like Haiti, because of something that could be easily prevented here in the U.S. Is it fair that we should have everything while they have nothing? Change a child's life today by donating to Hope for Haiti!

We are Hope for Haiti