Round Up starts next week! If you have (or know of) a child who will be 5 years old before September 1, we invite you to attend Round Up to learn about our programs for Young 5s and Kindergarten. See the graphic below for details about the sessions that are available. 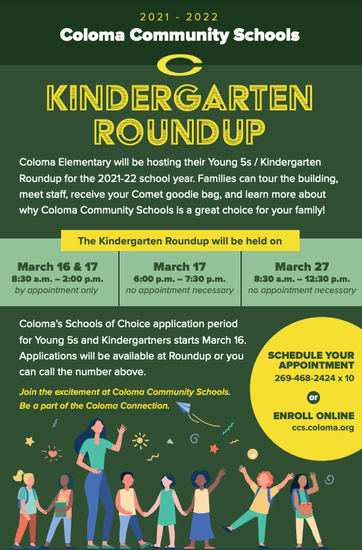 The whole school collaborative heART project was a success, and we have received lots of great comments since it was hung at the front of the school! Thanks to all the students who did such awesome work. It's amazing what we can do when we work together :) This month we are drawing pictures of animals and things we can see on a farm to compliment our school reading challenge Charlotte’s Web. We are also working on drawing dragons in Kindergarten, 1st and 2nd grade. 3rd grade is working on drawing multimedia dragon eyes with pastels and paint! 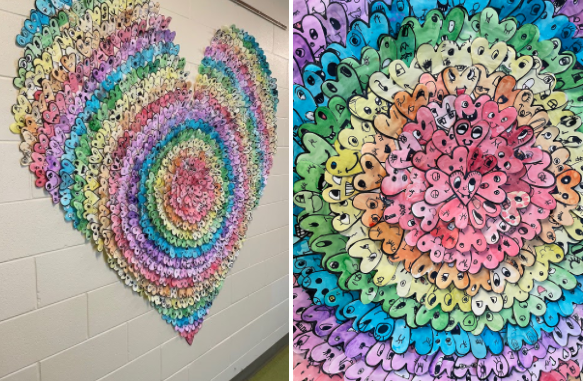 In February we participated in our annual Kids Heart Challenge with the American Heart Association. We raised $4,932. This is our highest total since I started at Coloma Elementary 4 years ago. We am so proud of our students. We had 44 students registered. Those 44 students pledged to be kind, drink more water, and move more during heart health month. I was pied in the face by our top two fundraising students last week. Check the website for that video. The prize order was placed last week. Students receiving larger prizes will get them after spring break. Due to uncontrollable circumstances, I plan to get students caught up in March on some jump rope lessons they missed last month. Students will participate in fun locomotor and throwing games as we lead up to spring break.

We have had a busy month in music class. Kindergarten wrapped up their unit on Carnival of the Animals and moved on to reviewing the songs and concepts that they’ve learned throughout the year, like steady beat and voice uses. First graders recently had an assessment on Peter and the Wolf to see if they could identify characters in the story by simply hearing their musical themes. The second graders played music with Boomwhackers, which are color-coded plastic tubes that play specific notes when you hit them on the floor, and they’ve been doing well at singing melodies using so, la, and mi. Third graders have begun learning about the families of the orchestra after wrapping up their unit on the treble clef notes. The Young 5s have been excited to start exploring basketball skills in the big gym. They also created artwork for Black History Month inspired by Alma Thomas and the 12-bar blues, and they have been playing the blues and moving to music. 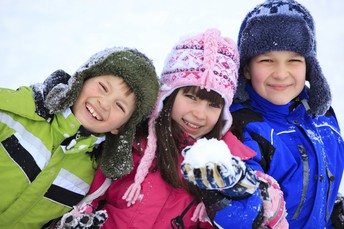 We will be outside for recess everyday as long as the temperature is above 10 degrees (including wind chill). Please be sure that your students is dressed for colder temperatures.

If there are snow gear that your student needs, please reach out to your child's teacher and we will do all that we can to support!

Dropping Off and Picking Up Reminder

When dropping off or picking up your student in the car rider lane, we ask that you:

A safe and smooth process is our priority. Thank you for your support!

Don't forget that we have a late start on Wednesday, March 24th! 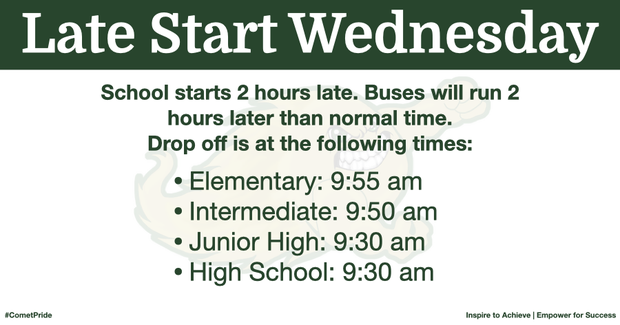 When it comes to responding to calls, emails, or messages Coloma Elementary staff follows the "24 hour rule." In other words, we will make every effort to respond within 24 hours. We often do so before that, but sometimes our schedules can get busy. We appreciate your understanding. 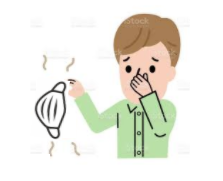 Students have been given two face masks from their teacher. Per our Safe Return to School Plan reusable face masks must be washed daily. Please help us in our efforts to keep our students and staff healthy and safe!

Communication is a priority for all Coloma staff. We use SchoolMessenger to share information electronically with our families. Over the last few months we have received feedback from parents that they are not receiving emails with important messages, reminders, and newsletters. If you find yourself in that group, please reach out to our office staff to make sure we have a current email address in PowerSchool. If we have the correct email address, then the situation is that the parent may have changed their settings to have our emails blocked. If you would like to fix that, our office staff can help you with that too. 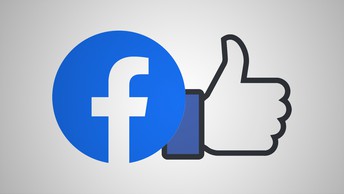 How can you stay connected to what's happening at Coloma Elementary? 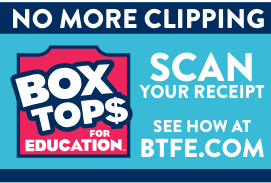 Check out how you can support our school through Box Tops for Education!

One of the most commonly asked questions is: “How long will someone have to quarantine if there’s a case of COVID-19?" Our response is:

“The health and safety of our students, families, and staff is and will always be our primary concern. We have been working diligently over the past several months to prepare for the safe return to school for our students and staff—implementing sanitization and social distancing protocols across the district. In the event of a COVID-19 situation in one of our buildings or classrooms, we will work with the Berrien County Health Department to assist in contact tracing to determine who needs to quarantine and for how long as every COVID exposure is unique. Ultimately, the BCHD will provide specific guidance related to quarantining and isolation.”

Isolation/Quarantine of Staff or Students
Breakfast and Lunch Menus 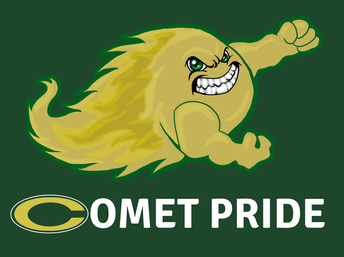 262 South West Street, Coloma, MI 49038 jklein@ccs.coloma.org (269) 4682420 ces.coloma.org/
Embed code is for website/blog and not email. To embed your newsletter in a Mass Notification System, click HERE to see how or reach out to support@smore.com
close
Powered by Smore
Powered by Smore