kyree is using Smore newsletters to spread the word online.

Get email updates from kyree:

Cold War between the Soviet Union and the United States intensified in the late 1940s and early 1950s, hysteria over the perceived threat posed by Communists in the U.S. became known as the Red Scare. Communists were often referred to as Reds for their allegiance to the red Soviet flag. The Red Scare led to a range of actions that had a profound and enduring effect on U.S. government and society. Federal employees were analyzed to determine whether they were sufficiently loyal to the government, and the House Un-American Activities Committee, as well as U.S. Senator Joseph R. McCarthy, investigated allegations of subversive elements in the government and the Hollywood film industry. The climate of fear and repression linked to the Red Scare finally began to ease by the late 1950s

Following ww2 the democratic United States and the communist Soviet Union became engaged in a series of largely political and economic clashes known as the cold war. The intense rivalry between the two superpowers raised concerns in the United States that Communists and leftist sympathizers inside America might actively work as Soviet spies and pose a threat to U.S. security 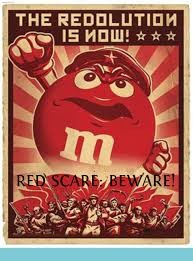 kyree is using Smore newsletters to spread the word online.