The Mystery of the Domestic Dog

The Mystery of the Domestic Dog

How do humans use their knowledge of genetics to determine the origin of the domestic dog?

We all know of the modern dog; the ones that we pet, cherish and love. When we think of how dogs evolved, we always think of the wolf. Scientists agree that somehow the wolf evolved into the dogs we know today. However, that "somehow" has been debated by scientists for many years. How exactly did the wolves evolve into the canines of today? What part did humans play in this natural selection scene? There are four popular theories that scientists have come up with after many studies to answer these questions, but which of these theories is top dog? To find out, we will first need to know what these theories are and the evidence that backs them up.

There are many ways scientists have analyzed dogs to try to uncover their origin. One way they do this is by analyzing the genes of the dogs. According to "Dogs and Humans Evolved Together, Study Suggests" from LiveScience, the Chinese Academy of Science analyzed the genes of 4 wolves, 3 native Chinese dogs, a German shepherd dog, a Belgian Malinois, and a Tibetan mastiff. The DNA researchers came to the conclusion that gray wolves split from the Chinese dogs about 32,000 years ago, bringing forth the domestic dog. The researchers believe that the Chinese dog was the missing link to bring wolves to dogs, which may explain how the wolf became the dogs we know today. But this isn't the only theory about how dogs came to be...

The gray wolf, thought to be the dogs ancient ancestor.

Thought to be a Chinese dog that split from wolves 32,000 years ago. (Picture not available)

An example of the modern dog.

As we saw in the last theory, we can use modern dogs to help us determine the past. However, many scientists are also using fossils to attempt to determine the origin of the dog. According to "Dogs Domesticated 33,000 Years Ago, Skull Suggests" from LiveScience, a canine skull was found in Siberia, close to the Siberian mountains. After analysis, they concluded the skull was from 33,000 years ago, when the dog became domesticated. The team believes that dogs came to be in the middle east. According to LiveScience, another skull was found in Germany and is 36,000 years old. Scientists analyzed the fossil's DNA. The fossil had more dog like qualities than the gray wolf, proving it was, in fact, an ancestor of the dog. The Smithsonian has published part of this analysis in their magazine, and the fossil is becoming more known in the science world. 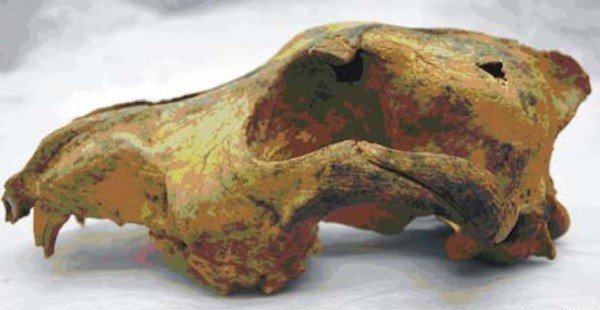 This next theory involves not just dogs, but humans as well. All of this information from this theory is from National Geographic's "Dog And Human Genomes Evolved Together." Multiple studies from the University of Chicago have concluded that dogs and humans have been evolving on a parallel. They share some major changes to their bodies, such as diet, select neurological processes, and even some diseases like OCD and epilepsy. The same scientists who conducted that study also compared sequences for transporting neurotransmitters between dogs and humans. It turns out that these two organisms share very similar sequences for many things, such as cholesterol processing. One of the scientists wrote added to a science journal called Nature Communications,They most likely occurred from sharing the same environment. In the journal, it gives the example that less aggressive dogs bonded with humans and got their protection. Due to the laws of natural selection, most dogs are now less aggressive than in the past. This could very well be the truth, but there is still one more theory to cover.

This theory originates from a study conducted by Adam Boyko and Laura Shannon. All information past this point comes from the article from The Atlantic titled "A Genetic Study Writes Yet Another Origin Story for Dogs". The team traveled across the world to find village dogs, dogs that didn't have any owner but still lived in human populated areas. Village dogs are mostly mixed breed, so they are some of the most diverse dogs in the world. After collecting almost 549 dogs from 38 countries, the team analyzed over 185,000 parts of the dog's DNA. The team concluded that dogs are from Central Asia, most likely around India.

Q: So which is the correct theory?

A: No one really knows!

There is a reason why they are called theories-- none of them have been proven to be fact. While there are many theories based on scientific evidence and reasoning on how the dog was domesticated, no one is completely sure which interpretation of what evidence is correct. This quote from scientist Gregor Larson, who is trying to figure out the origin of dogs himself, sums it all up: "The origins of modern populations are extremely messy, Thus, it is difficult, if not impossible, to infer the true deeper history of [dogs] by exclusively investigating extant populations, no matter how far flung or deeply sequenced they are." The dogs of today provide little help in determining their past, and fossils can't give us the whole story. Many scientists such as Larson are creating new studies to try and make sense of this undiscovered past. For now, the origin of the dog is still a fascinating mystery.

3 Weird Things That Domestication Did to Dogs

Which theory do you think is the closest to the truth?