The Hero of the Trojan War

The Hero of the Trojan War

His father was Peleus, the mortal king of the Myrmidons- a people who, based on legend, were incredibly fearless and skilled soldiers. His mother was a Nereid, or sea nymph, named Thetis. 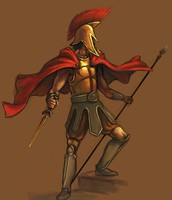 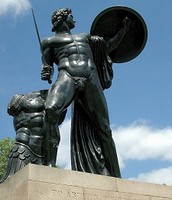 Achilles was a great hero with superhuman strength and courage and was extremely handsome. Homer, who wrote the Iliad in 720 BCE, gave Achilles more qualities, saying he was vengeful and quick to anger and could get irritated when he did not get his way. He was also very loyal and would sacrifice anything for his friends and family. Achilles was not immortal, and his mother did everything she could to make him immortal, including dunking him into the River Styx. These waters were said to confer the invulnerability of the gods, but when Thetis dunked him in, his heel never touched the water, and as a result, Achilles became invulnerable everywhere except there. He became the bravest and greatest warrior of the Agamemnon, or the Greeks, in the Trojan War.

Role in the Iliad and the Odyssey

Homer's epic poem The Iliad tells the story of Achilles's adventures during the last year of the Trojan War. The poem's protagonist, Achilles, has so far led battle after battle and is undefeated. The main conflict is between Achilles and Agamemnon, the leader of the Archaean armies and Menelaus's brother. In a previous battle, Agamemnon had taken as a concubine a young Trojan woman named Chryseis. Her father, a priest for Apollo, tried to buy the daughter's freedom, but Agamemnon refused. Furious, Apollo punished the Greek armies buy sending a plague to kill all the soldiers. As his ranks diminished, Agamemnon finally gave back Chryseis, but he then demanded Achilles's wife, the Trojan princess Breseis, to be his new concubine. Achilles followed orders and stayed in his tent, refusing to fight for his leader. Without Achilles on the battlefield, the Greeks started to lose battle after battle. Eventually, Achilles's best friend Patroclus offered a compromise: Achilles would not fight, but he would let Patroclus use his powerful armor as a disguise. The plan was working until Apollo, still seeking revenge, helped the Trojan prince Hector find and kill Patroclus. Enraged, Achilles promised revenge. He chased Hector back to Troy, slaughtering Trojans as he went. Once they got to the city, Hector tried to reason with Achilles, but Achilles thought otherwise: he stabbed Hector in the throat, killing him. He then humiliated the prince of Troy by attaching him to his chariot and dragging him back to the Archaean camp and throwing him onto the garbage pile. According to the Odyssey, Achilles returned to Troy after Hector's funeral to seek further revenge for Patroclus's death. However, the still seething Apollo told Hector's brother, Paris about the event. Paris, not a strong warrior, ambushed Achilles as he entered the city. Paris shot his enemy with an arrow, which Apollo guided into Achilles's one weak spot-his achilles heel, and Achilles died on the spot.

Achilles was allied with Hephaestus, who produced Achilles's armor. Achilles's main foes were Apollo and Hector, who played big roles in the fall of Achilles.

(The Editors of Encyclopedia Britannica)