Get email updates from isabella:

Let's Begin On Our Informational Tour of Jordan

The flag of Jordan is the official flag of the Hashemite Kingdom of Jordan, which represents the state, its sovereignty, its institutions and its citizens, both in Jordan and worldwide. Wikipedia

Explore: Hashemites this was found in google.

The Geography of Jordan

The country of Jordan is located on the continent of Asia and is surround by Syria, Iraq, Saudi Arabia and Israel.The most remarkable physical feature of the country is the Jordan Rift valley, which is a narrow depression extending from the Gulf of Aqaba for approximately 360 km north to the upper Jordan River. Much of the land in this graben, as it is called, is below sea level, with the lowest levels in the Dead Sea at-794. Jordan is generally a flat desert plateau, east and west, as the western edges of the Syrian and Ard As Sawwan deserts stretch across the land. In the west, the Great Rift Valley (high hills and mountains) separates the East and West Banks of the Jordan. Jordan is a desert land and it is very hot and the people are poor and most live in poverty so they must take care to get plenty of fresh water and stay cool to avoid heat stroke. The location of the country of Jordan is a rough environment for the people of the country as they are surrounded by other enemy countries and terrorism is prevalent making life difficult, threatening and harsh.

Jordan is a poor country for the people but there are the rich people who make their money off the drilling of oil and exporting it to other countries and because of their location they also export water.

The currency of Jordan is called the Dinar and the value of the dinar changes with then rise and fall of the economy.

The birth rate is 25.35 they think every child will live to 80 and is both genders and there is a crude death rate of young children brought on by poverty where there is a lack of food, water and money for medical care.

Jordan is a poor country and education is not a priority so the literacy rate is very low and most children beyond the age of 15 do no receive and education.

The Rich Culture of Jordan

Jordan has a rich culture of handmade pottery, jewelry and beautiful traditional costumes that many tourists buy to take home as souvenirs.

Many people Jordan still dress in traditional clothing but the Western influence on younger generations is changing that to more modern western clothing and style.

The main language of Jordan is Arabic but there are other dialects spoken because of the surrounding countries and of course the English language is spoken by some of the people.

Speaking of fasting and breaking fasting, the food of Jordan is important it is more than just food it is social custom at every meal. The national dish of Jordan is called Mansaf which is lamb seasoned with herbs and served on a platter with rice s

sprinkled with almonds and other nuts.

Then people of Jordan have many options for entertainment like going to the movies, listening to music and the younger generation of Jordanian people like to go dancing in clubs. The older generations enjoy the traditional customs of feasts and dancing.

The History and Climate of Jordan

Jordan is a desert country and so its temperature fluctuates at 70 degrees and hotter is some regions based on the location within the country some areas can become uninhabitable because of how hot the temperature can get. Jordan does welcome the rainfall of 20 cm per year because water can sometimes be scare in some areas.

Jordan was settled by nomadic tribes in the Bronze Age, which consolidated some small kindgoms during the Iron Age-such as the Edomites andAmmonites, with partial areas controlled by the Israelites. if it was not settled it would not have people living on it to day. Greek and later Roman influence. One of the major populations were the Nabateans, while Jews settled the area of Jordan Valley, within the domain of fRoman Judea. Under the Romans and the Byzantines, Transjordan was home to the Decapolis in the North, with much of the region being designated as Byzantine Arabia. Classical kingdoms located in the region of Transjordan, such as the Roman-era Nabatean kingdom, which had its capital left particularly dramatic ruins popular today with tourists and filmmakers.

The country of Jordan is evolving in that the younger generations are assimilating the music, fashions and culture of the Western World. This younger generation is moving from wearing traditional Arab clothing to Western apparel such as jeans, t-shirts, and athletic footwear.

The language of Jordan is changing in that more and more Jordanians are speaking the English language to become more interactive with tourists from the Western and other European countries.

The main thing of both the United States and Jordan that they have in common is that they have a strong belief in their country and traditions and customs such as holidays even when becoming more modern by the day.

The difference between the U.S. and Jordan is in religious belief and religious customs where there is mainly one religion and everyone follows that as compared to the U.S. where many religions are welcome and practiced. 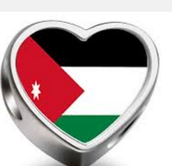