Arath is using Smore newsletters to spread the word online.

Get email updates from Arath:

Though both films showed different scenes in different eras, Rupert Goolds' film showed much more emotion during this scene and also made it ten times more dramatic. Yes Roman P. showed the right era of the play, But they other film had better acting and thats what keeps your attention in a movie/play. 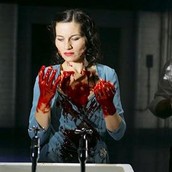 Arath is using Smore newsletters to spread the word online.