Get email updates from Cecilia:

Introduction to the ruby

The ruby is the beautiful gemstone that is the birthstone of anyone born in July, like myself. I have studied and uncovered many interesting facts about my unique birthstone, the ruby.

Ancient and Modern Uses/Beliefs of the Ruby.

In ancient times it was believed the ruby represented desire, devotion and passion. It was also called the stone of prophecy and said the stone would darken when the person bearing it was in some form of danger. In ancient times, common uses were jewelry, antidotes for poison and rubbing the stone on your skin to said "give it more youth". In modern times uses aren't much different, it is still used in jewelry. In modern times it is also commonly used in unique carvings, bowls or vases.

Facts About The Ruby

•The hardness on Moh's Hardness Scale is 9.0

•The ruby has no cleavage

•The ruby fractures uneven or conchodial

•It has a hexagonal or corundum crystalline structure

•The chemical formula is aluminum oxide with chromium (A1O3:Cr)

•Finally, the ruby has a vitreous luster.

The ruby can mainly be found in the following places

Also, various places in Greenland and Australia. The ruby can also be found in the U.S, however that would be very rare. The availability of the gemstone over all is quite rare.

The ruby can be found in the following colors

Though you'll most commonly find the ruby in the color red.

Finally Words of My Birthstone.

Overall the ruby is a grand gem that has many uses! Some interesting facts are that the ruby was supposed to resemble the sun. Also, the ruby is one of the "four precious gemstones". Finally, the stone was said to be a physical and emotional healing stone. In conclusion, my birthstone, the ruby, is a wonderful stone with a great history and pretty very pretty gem.

www.americangemsociety.org
The July birthstone is said to stir the imagination. Uncover the beauty and allure of the Ruby at AmericanGemSociety.org. 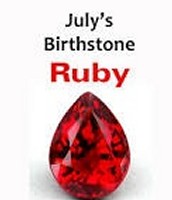 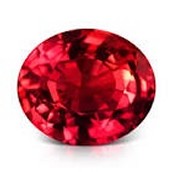