WELCOME TO THE ROCKY POINT E-NEWSLETTER

This is the official e-newsletter for the Rocky Point Union School District. 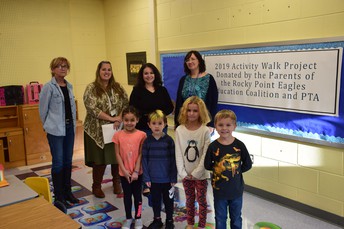 FJC students are hopping, skipping and jumping in three newly designated rooms that house activity paths. The custom sensory paths help students get out of their seats and stay active during the school day as they are challenged by exercises and activities including wall pushups, a crab walk, leapfrog, yoga poses and more. Donated with funds from the Rocky Point Eagles Education Coalition and the PTA, the pathways address skills like motor coordination and hand-eye coordination, which both have a major impact on classroom skills. They allow students to take some time to refocus and use different brain stimulation through physical activity. 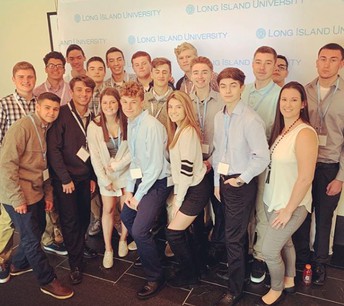 Students in the High School’s Virtual Enterprise class networked and learned from industry experts when they attended the annual Virtual Enterprises International Business and Entrepreneurship Leadership Conference at Long Island University. Accompanied by business teacher Dorothy Burns, the students also participated in informative breakout sessions that highlighted important business concepts, such as social media marketing and secrets to fundraising success. As a culmination to the event, students delivered an elevator pitch about their Virtual Enterprise company, GeoMerch Inc., which was judged by business professionals. 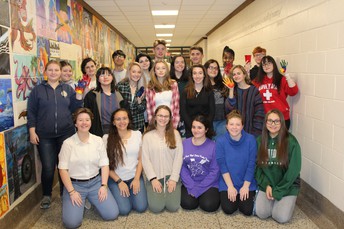 Seventeen Rocky Point High School students have been inducted into the National Art Honor Society, joining nine other students from the high school who are current members of the distinguished national organization that inspires and recognizes students who have shown an outstanding ability in art.

“This is such an honor for these students as they continue to pursue their artistic ability in all areas of art,” Principal Jonathan Hart said. “We also commend our art teachers – Gregory Armine, Katerina Kyriakakis and Seth Meier – for their work in fostering the excellence expected as members of this prestigious organization and for bringing the arts to our larger community.”

As one of their projects of compassion, the National Art Honor Society reached out to the students and staff of the school to help raise more than $300 that helped feed families in need in the community for the Thanksgiving holiday. The students sold feathers to post onto a paper turkey they created in the high school hallway. 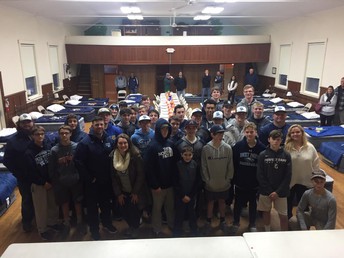 Compassion in the Community

Members of the district’s varsity, junior varsity and middle school baseball teams volunteered at Maureen’s Haven, a shelter for people in need in Riverhead.

This annual event had student-athletes working together, along with coaches Anthony Anzalone and Eric Strovink, setting up beds, stocking the pantry, setting dinner tables and packing lunches and snacks. When they finished setting up the location, they presented the director with 50 fast-food restaurant gift cards to give out to the people at the facility.

The students also collected and donated food items, and packaged snacks, rain ponchos, gloves, winter hats, toothbrushes, lip balm and so much more so each person at the shelter can benefit from the kindness for weeks to come.

Thank you to these students who demonstrated their hard work and compassion with this heartwarming gesture.

Twelve Interact Club students showed goodwill, leadership and personal integrity when they participated in a fall cleanup at Camp Paquatuck, a summer camp and year-round respite care center for people with disabilities that is supported by many Rotary Clubs on Long Island.

The students helped prepare the grounds and buildings at the Center Moriches campground for the upcoming season by raking leaves and cleaning cabins. They will return in the spring to prepare the camp for the summer season. 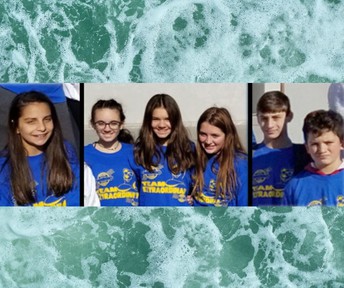 Five Middle School students and one High School student participated in the Town of Brookhaven’s 10th annual Polar Plunge to benefit Special Olympics. Rocky Point Middle School eighth graders Ava Dantuono, Alexandria Ryan, Charlotte Ryan, Nicole Spadafina and seventh grader Vito Spadafina and Rocky Point High School sophomore Christian Dantuono were members of Team ExtraOrdinary 2019 to honor a local boy born with Down syndrome and his family, two of whom – Robert Fitton and Mary Fitton – serve as co-captains of the growing team. Collectively, more than $12,000 was raised by the more than 30 members of the team, which will help fund training and participation in Special Olympic games. 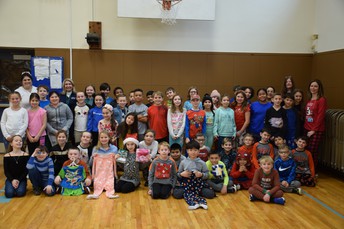 Students and staff shared in the spirit of giving when they helped collect pajamas for the Pajama Program, an initiative organized through Scholastic’s Great Bedtime Story Pajama Drive.

Spearheaded by JAE fourth grade teacher Deborah Vieira several years ago, the annual fun and festive way to help others spread to FJC and resulted in more than 200 pairs of pajamas being donated this year.

Mrs. Vieira delivered the pajamas to Little Flower in Wading River, where each pair was matched with a bedtime book from Scholastic and distributed to children who live in the local community. 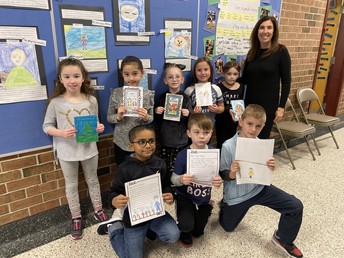 As students throughout our district continue to develop a deeper understanding of society and learn about people who are important in their school, neighborhoods and larger community, numerous thoughtful holiday projects took place.

Second graders in Nichole Schirtzer’s class participated in Cards for Cops and created holiday cards for the men and women in blue. Their messages thanked those who help strengthen and protect the larger community. The cards were submitted to the non-profit organization Beyond the Badge in Wantagh, where they were distributed to various police precincts across Long Island.

Third grader Lily Bonacasa helped make holiday wishes come true for other children, all to honor the memory of her hero father, Staff Sgt. Louis Bonacasa, who was killed in Afghanistan four years ago. Lily founded Lily’s Toy House to keep her father’s spirit alive and to provide Christmas presents for children in need. Veterans across the state paid it forward when they helped to organize toy drives to benefit Lily’s organization. 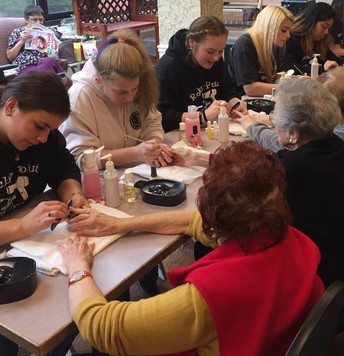 Students in the High School’s cosmetology program visited the Atria Senior Living facility in South Setauket and provided manicures while conversing with the residents. Accompanied by teachers Jean Stiastny and Rosalie Retus, the field trip was an opportunity to hone their technical skills in the two-year Career and Technical Education course while building self-confidence and pride in their work. 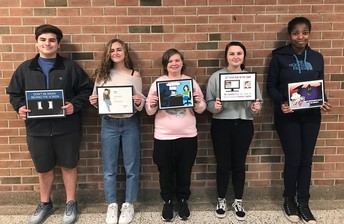 Under the guidance of art teacher Katerina Kyriakakis, students Milayna Balthazar, Elizabeth Carrera, Alyssa Intini, Robert Manginello and Emmie Meyer have entered the New York State Office of Information Technology Services’ computer safety contest. The competition works to engage young people to think about cybersecurity through the creation of posters that will encourage their peers to use the internet safely and securely.

“We are grateful for the efforts of the students and the twofold mission of this contest: to build awareness and make a positive impact on their classmates on cybersecurity issues, while also enabling them to harness their creativity and to take a unique approach to help develop solutions with their visions,” Rocky Point High School Principal Jonathan Hart said. “We wish them well in the final part of the competition and thank Ms. Kyriakakis for encouraging their self-expression.” 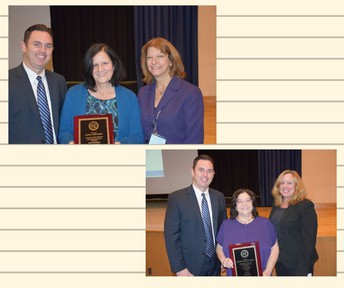 Duo Honored for Dedication to Students

Two Rocky Point School District staff members, who both retired at the end of 2019, were honored for more than 40 years of collective service to the students of the district at a Board of Education meeting. Linda Tobiassen, a teacher aide at FJC, and Michela McLoughlin, who served as an assistant in the main office at JAE, were lauded by FJC Principal and JAE Principal Linda Murphy, respectively, for the roles they played in the success of students in Rocky Point. 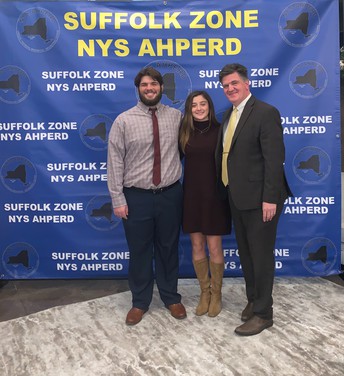 Seniors Clare Levy and Gary Russin were each named Suffolk Zone award winners by the New York State Association of Health, Physical Education, Recreation and Dance. Clare and Gary were chosen for their outstanding character, leadership skills in schoolwide as well as physical education and health class activities, positive attitude toward instructional activities, scholastic achievements and being role models for their peers.

Clare, a three-sport scholar-athlete – captain of the soccer team, basketball team and lacrosse team – is also an AP Scholar and a member of the National Honor Society. She has received athletic scholarship offers for lacrosse and has chosen to attend Stony Brook University, where she plans to major in history. She also has numerous clubs and activities on her high school résumé, including Athletes Helping Athletes, Leaders Club and Polar Plunge for Special Olympics. She has coached both youth soccer and lacrosse.

Gary, a member of the football team, has an impressive list of accomplishments in addition to being an AP Scholar. He is the president of both the National Honor Society and History Honor Society, has been a recipient of several local awards and is involved in Athletes Helping Athletes, Compassion Without Borders and the Debate Club.

At the end of each sports season, the New York State Public High School Athletic Association honors high school teams and individuals who excel in the classroom. To receive Scholar-Athlete team recognition with a certificate, the team’s average GPA for 75% of the roster must be greater than or equal to 90%.

Congratulations to our fall scholar-athlete teams:

“These student-athletes work very hard throughout the year and deserve to be recognized for their academic success,” Director of Health and Physical Education Charles Delargy said. 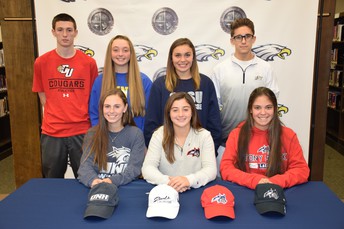 At the high school’s NCAA Signing Day, seven students were lauded as trailblazers and ambassadors to the athletic program by Athletic Director Charles Delargy. Surrounded by family members, administrators and teachers, the ceremony was a congratulatory event for: 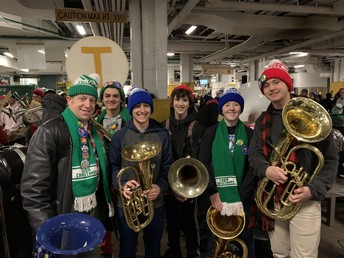 The magical sounds of the low-pitched tuba were a celebration for thousands of spectators to hear and witness at The Rink at Rockefeller Center’s 46th annual Tuba Christmas. Rocky Point High School freshmen Dan Curley and Andrew Trebilcock, sophomore Shaun Sander, junior Tristan Duenas and senior Riley Watson, along with the high school’s assistant marching band director Vincent Ragona, were among the hundreds of baritone horn, euphonium, tuba and sousaphone players of all ages and abilities from around the country who joined together to perform holiday carols and other crowd favorites on their brass instruments.

“We are so grateful for this real-world opportunity for our students to use a public platform to share in the gift of music,” Rocky Point High School Principal Jonathan Hart said. “We also thank Mr. Ragona for leading and sharing in this memorable event.” 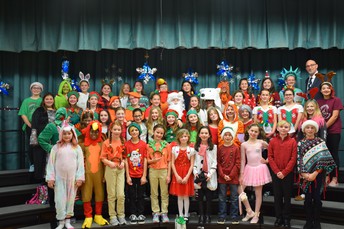 Students have numerous opportunities to showcase their musical skills, and the winter concerts were exceptional examples of Rocky Point’s excellent music program. Students in all four schools worked hard and their performances highlighted their efforts. We thank our music staff, parents and especially students for keeping us all engaged and inspired by your efforts.

Channels of Communication - Stay Connected With Us! 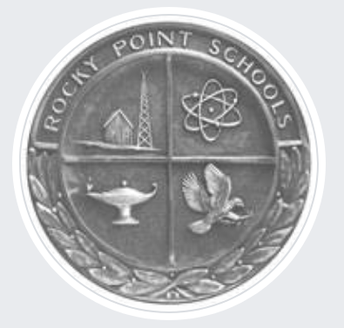 Follow School News
Embed code is for website/blog and not email. To embed your newsletter in a Mass Notification System, click HERE to see how or reach out to support@smore.com