Congratulations to March's Students of the Month!

This year we had another successful model legislation. We had 26 students attend with many of our students filling leadership roles. Cade Tipold was the youth governor and Tre Montinique was the Senate pro tempore. Most of our bills were successful in both chambers, with some of them receiving high praise for their thoughtfulness and preparedness. We had a few students elected to office for next year; Jason Esquivel was elected Secretary of State, Nate Jenkins was elected Speaker pro temp, and Cade Brumley was elected Lieutenant Governor. These students will be the state leaders for next year. 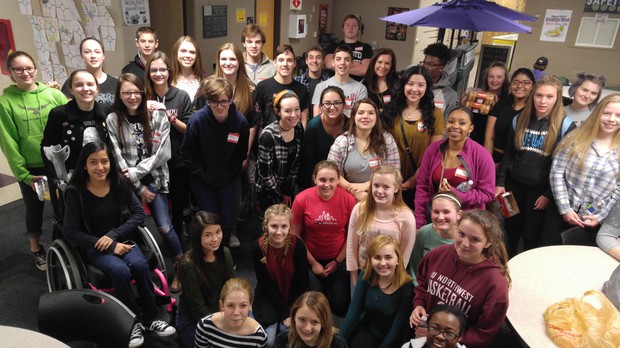 When the scores of all teams were tallied, Hobart placed 3rd overall (whole team pictured). This is our best overall finish in the Duneland Conference in about 15 years. 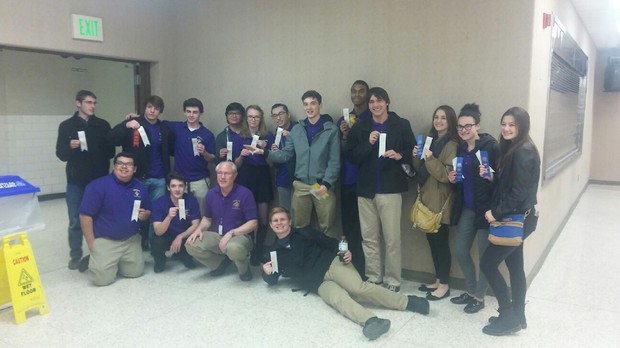 The Life Skills Classroom of Hobart High works on real-life jobs in the vocational training classroom. They do a wide variety of hands-on jobs that will help them to be career ready when they leave high school. They are involved in many different janitorial jobs like washing cafeteria tables and sweeping the floors. They collect paper recyclables weekly throughout the building and take it out to the recycling bin. They pick up litter in the halls, using reach tools. They shred confidential documents. They also make copies, using the copy machine, laminate papers, use a die-cut machine and do some assembly work. Some work out in the community at the Hobart Food Pantry and the ReStore. These skills will help them to learn how to work in a team, follow directions, clock in and out of the job, document work, and a wide variety of other skills.

Recently they began a new job in conjunction with Liberty Elementary. They are cutting, counting, sorting, and gluing “Box tops for Education”. These box tops can amount to over a thousand dollars of free money for the school to purchase items. What a great way to help others while learning job-related skills! 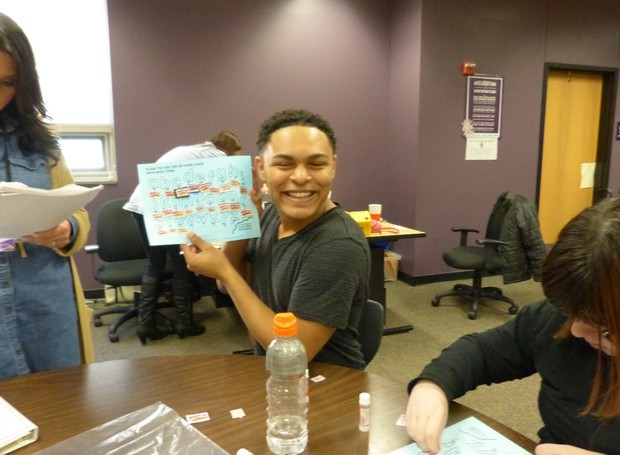 Hobart, IN -- After advancing through two phases of online competition, the Hobart High School's JROTC Academic Team composed of Natalie Atkosh, Jacob Powers, Drew Gearhart, Brooke Harter, Eric Jahnke and Ariana Brewer will compete in person at the Championship event in Washington, DC. The 2017 U.S. Army JROTC Academic Bowl Championship will be held on the campus of The Catholic University of America, June 23-27, 2016. This event is sponsored by the U.S. Army Cadet Command, JROTC Headquarters and is conducted by College Options Foundation.

Hobart's JROTC team earned top scores out of the 1,498 Army JROTC teams that competed from around the world. The team is one of only twenty-four Army JROTC Academic Bowl teams in the nation to advance to the National Academic Bowl competition, which includes an all-expense paid trip to the Championship event in DC.

During the two fast-paced preliminary rounds, students were tested on their knowledge of JROTC curriculum, English, Math and Science. One of the main goals of the JROTC Academic Bowl is to prepare students for state exit/graduation exams as well as college entrance exams, such as the SAT and ACT.

College Options Foundation is a non-profit organization dedicated to enriching the academic development of high school students and assisting them with their preparation for higher education. Using academic competitions, college exam study guides, college admissions tutorials and personalized counseling, College Options Foundation has assisted the nation’s JROTC cadets worldwide for over a decade. 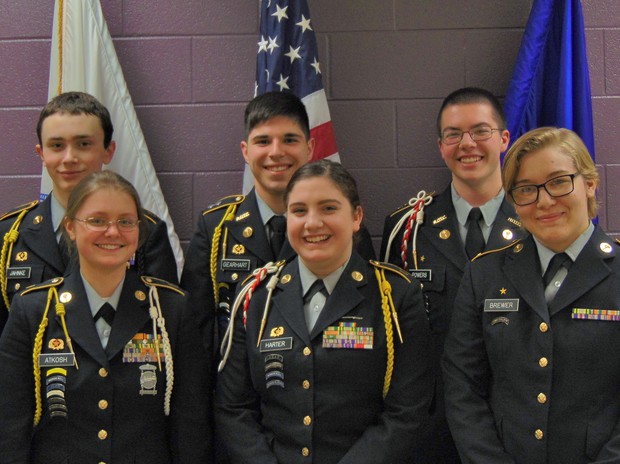 March 5-7 DECA traveled to The Indiana State Career Development Conference for DECA (an association of marketing students) with a dozen students who competed against approximately 1600 students from more than 80 high schools in more than 45 different events.

We are proud to announce that Cassidy Belk participated in the Sports & Entertainment Individual Event in which she was required to take a 100 question marketing test and participate in two Role Play events. She was a warded a competency medallion for scoring over 85% and a plaque for finishing 3rd in state in the Customer Relations Role Play event. We are so very proud of her accomplishment. 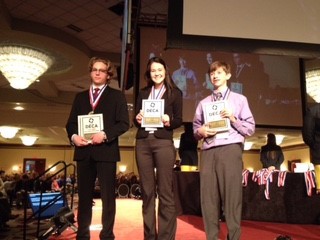 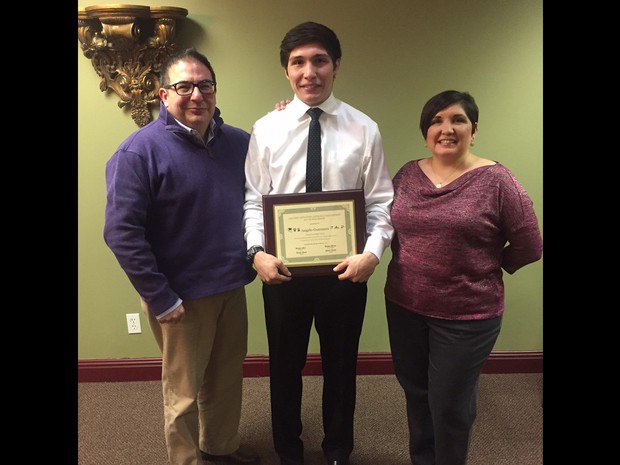 On March 13, 2017 the High School Brickie Leaders met with the Brickie leaders at Liberty and talked about how to be kind (since that is what Brickie Leaders are all about).

They played games to get to know each other, shared ideas on how to spread kindness, played charades acting out the ideas they had come up with, and then they brainstormed together on what kind people do. Then, they talked with the students about how to improve as people and how to be more kind. I was very impressed with what our high school students came up with on their own.

In the end, the HHS Brickie leaders used an idea that I had and taught each group a few words in a different language, and then they all shared with each other. The languages they shared were French, Russian, and Spanish.

It was great to see the elementary and high school students sharing, communicating, and participating in ways to improve the school culture. 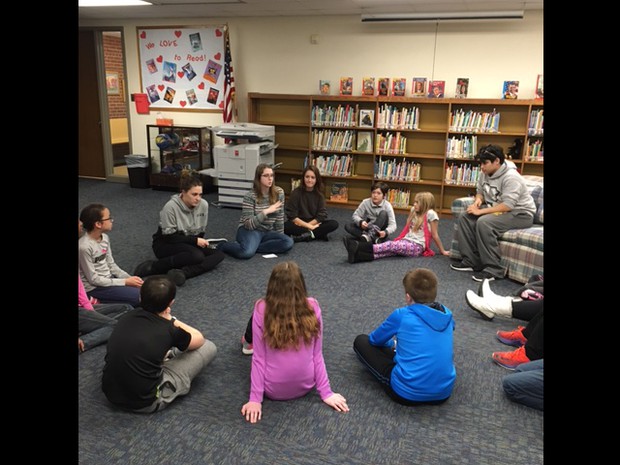 2015-2016 Yearbooks are here and can be picked up in Mrs. Pagone's class, Room 2307 before or after school. We have 30 available for purchase too. These can be purchased in the main office for $55.00 (checks or cash only). First come, first serve.

Help your student preserve the memories of high school that they can relish for the next 10, 20, and 30 years. Buy online at www.yearbookforever.com. You can use a credit card, debit card, or PayPal. You can also purchase yearbooks in the main office using cash or check. Yearbooks cost $55.

Mr. Cline teaches math. He was nominated for having constant communication with parents.

Mr. Osika teachers health and physical education. He was nominated for supporting students outside of the classroom.

Parents can learn about the options available at HHS for early college credit and Advanced Placement classes for the junior and senior year. Representatives from cooperating colleges will be there to answer questions about enrollment and registration, and to help parents hear about the value of having college credits before graduating from high school." 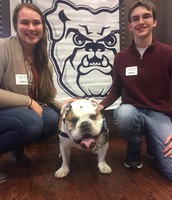 From Brickies to Bulldogs

JROTC Soars in their inspection

The JROTC had their national inspection and scored a 198 out of 200.

The week before Spring Break was an eventful one in Mr. Lain's Criminal Justice I classes, as Goldilocks was facing charges in no fewer than three trials for her antics at the home of the Three Bears. After completing the chapter outlining court proceedings, each class filled various rolls from Prosecutor, Bailiff, Defense Attorney, and even the flaxen haired defendant herself.
Charges ranged from simple trespass to "attempted murder" (according to the 5th Period's version). Various levels of creative license brought testimony alleging a love affair between Goldilocks' mother and a woodsman who was called in as a witness. During the 7th Period trial, Goldilocks was described as homeless, and living in a box until she was taken in by her friend Baby Bear.

Regardless of the wide ranging circumstances, the juvenile miscreant was ultimately found guilty by all three juries, and was led away to serve her sentence.

The photo shows an impassioned plea by defense counsel Mikey James under the watchful eye of the Honorable Judge Emanuel Turner. 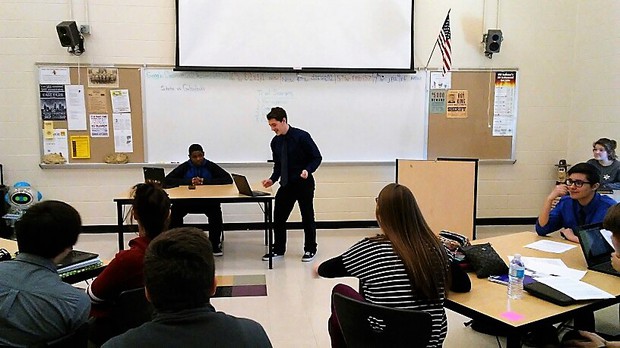 Safety is everyone's responsibility. There is no safety in silence! Use the tip line 942-TIPS or go to the School City of Hobart's website and access School Safety through the Cool Tools. All tips are anonymous.

How to find more information

Follow Colleen Newell
Contact Colleen Newell
Embed code is for website/blog and not email. To embed your newsletter in a Mass Notification System, click HERE to see how or reach out to support@smore.com
close