Canada's Future is Closer than We Think

Canada's Future is Closer than We Think

Like everything else in the world, Canada is always changing, sometimes for the better and sometimes for the worst. It is unfortunate that time travel has not been invented yet and that predictions are the only things that we know of in the future. In 2060, only 45 years later, Canada will make a drastic change in terms of immigration, demography and First Nations. Of course, everyone has their own way of thinking, but as an optimist, I see a bright future ahead of us. 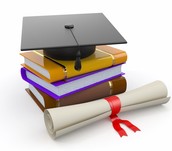 War is an Example of a Push Factor 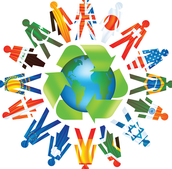 A part of Canada is made up of foreign-born Canadians, and it continues to rise today. 1 in 5 Canadians are foreign born, making Canada have the highest percentage among G8 countries. Determined by the NHS, in 2011, 20.6% of the population were foreign born individuals that arrived from immigration.

A big portion of the foreign-born population mainly lives in four provinces:

Within these provinces, they mostly live in the larger urban areas such as Toronto, Montreal, and Vancouver.

Within the past decade, almost 2,155,000 immigrants arrived in Canada. More than half of the immigrants arrived between 2006 and 2011, reaching a number of 1,162,900 within those 5 years. As the amount of immigrants continue to increase, there appears to be no signs of it stopping.

In order, these are the countries that supply the most immigrants to Canada.

This visual shows that the immigrants mainly come from Asia, Europe and the United States. All of the countries listed in the top 10 list are situated in Asia and Europe except for Mexico and Colombia.

Immigrant Workers and the Downside

Each year, approximately 250,000 immigrants come to Canada. Out of that amount, almost 2/3 are economic immigrants. Economic immigrants are well liked by Canada as they contribute money to the economy. They are also well educated and have special skill, training, knowledge and ability in their work, allowing them to have a smoother adaptation to the work force than of one that does not have a good education. Employers in Canada also hire thousands of foreign workers every year to immediately fill spots for labour. With all of these extra economic immigrants and foreign workers coming into Canada, this has created a problem for Canadians as a competition for jobs arise.

At 250,000 people, Canada already accepts a great number of immigrants. In upcoming years, this number will increase. The immigration target in 2015 is a total of 285,000 and due to this, Canada is becoming dependent on the net migration rate and not the natural increase rate.

When the baby boomer generation retires, thousands of job openings will occur, giving many job opportunities for immigrants. Also, once a big part of Canada's work force is gone due to retirement, the job spots need to be filled. If there is a lack of workers in Canada, this will result in a descend in the economy. This could lead to higher taxes and higher prices.

In 2060, a portion of the baby boomer generation will pass away. This will add on to the death rate of Canada. I assume that the birth rate will already be quite low at this time as it has already been making a gradual decrease for the past 5 years. This will make Canada enter stage 5 on the DTM, meaning that the population will decrease. Due to this, Canada will become dependent on the immigration rate to allow the population to continue to grow at a healthy level.

For these reasons, the immigration rate will also heavily increase. As the common provinces for immigrants to live in are Ontario, British Columbia, Quebec, and Alberta, the populations of these specific areas will become very dense and crowded. This will result in immigrants moving to other provinces, spreading more diversity throughout Canada. I would predict that the immigrants would go to Manitoba or Saskatchewan as they are less populated and the Maritimes may be too unfamiliar for them. 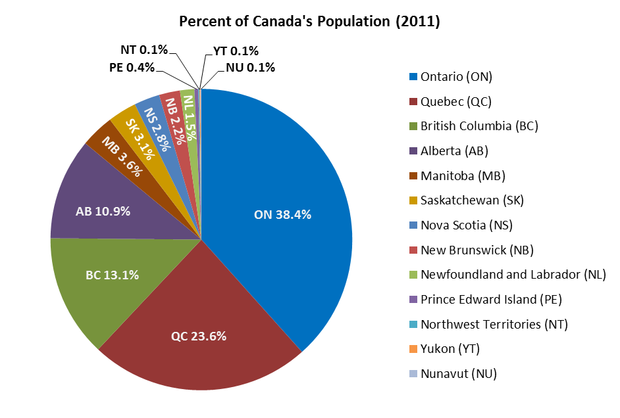 This shows that immigrants might go to Manitoba and Saskatchewan because they are the next lesser populated countries after Ontario, Quebec, British Columbia, and Alberta.
Additionally, Canada will continue to receive their biggest set of immigrants from Asia as certain countries in the continent are still heavily overpopulated and shows no potential for making a healthy decrease to form a stable population. Also, the problem of gendercide will still be occurring because of the overpopulation, so families in India and China may immigrate to Canada to escape the harsh conditions.

The Demographic Situation of Canada - Current

Canada has evolved into a low stationary country, meaning that it's population has a slow natural increase. The birth rate is a low 10.29/1000 population. Throughout the years, the birth rate has continued to drop because of good health care, family planning, reliable food sources, as well as a better status for women, resulting in later marriages. Also, the cost for children is now expensive. Living in a world of new technology, kids want the best new gadget, they want to join in extracurriculars, and they need money when entering a post secondary school, all to benefit the future generation of Canada. Additionally, due to good health care and sanitation, the total fertility rate is 1.59 children born per women, and the infant mortality rate is only 4.71 deaths/1000 live births. 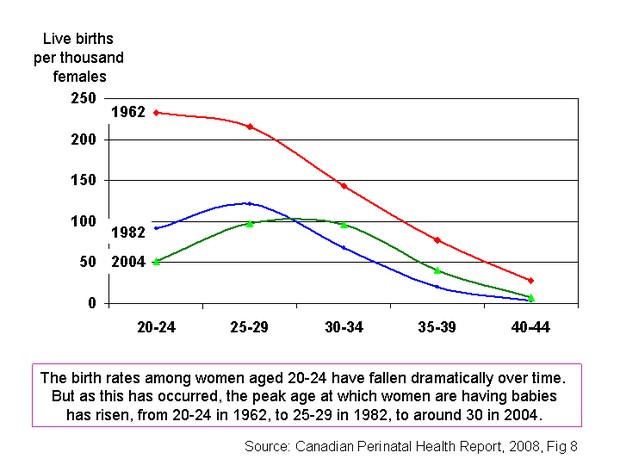 This graph shows the trend that as years go by, the birth rate continues to decrease, causing Canada to have such a low birth rate today.

The death rate of Canada is a low 8.31/1000 population. However, this will soon greatly increase because of the baby boomers. This generation is preparing to retire, which will cause Canada's dependency load to have a huge increase. With a high dependency load, the government would need to spend heavily on medication and social services. This generation will also cause the current life expectancy of 81 years, to rise. Due to the low birth rate and low death rate, Canada's population growth rate is 1.1% which is mostly made up of Canada's strong immigration.

A well known trait about Canada is that it is multicultural. In urban areas, the population is diverse as more than 3/4 of the population, live in cities.

In a census taken a little over a year ago, it was determined that the top 10 ethnic groups in Canada were:

Due to the current state of Canada's decreasing birth rate and the upcoming dependency load of the baby boomers, Canada will reach stage 5 of the Demographic Transition Model. In the last decade, Canada's birth rate has gradually decreased and this trend will most likely continue in the future. Also, as social media is fast spreading news today, there is a lot more exposure to problems regarding feminism. Due to people becoming more familiar with this situation, hopefully, a women's status will be much more appreciated and accepted in the future. Acceptance means more job opportunities for women, giving them less time to raise a child, thus being part of the reason that the birth rate will decrease.

The Situation of the Aboriginals in Canada - Current

In a 2011 census, it was discovered that the total number of aboriginal people in Canada was 4.3% of the population, which is about 1,400,685 people. Sorted into 3 groups, First Nations are the most populated aboriginal group with 851,560 people. Following behind are the métis with a population of 451,795 people, and the Inuit with 59,445.

There are actually aboriginals living in every province and territory in Canada. The most populated province/territory to the least populated is ordered below. 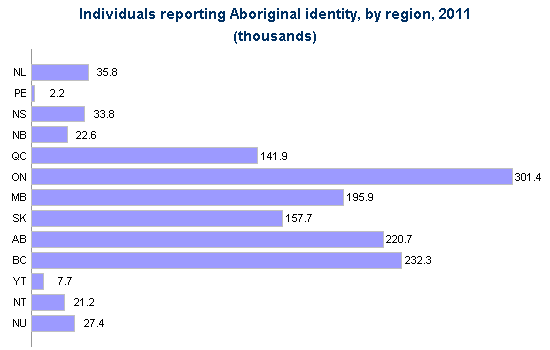 This graph displays the data above, showing that there are aboriginals populated in every province and territory of Canada. 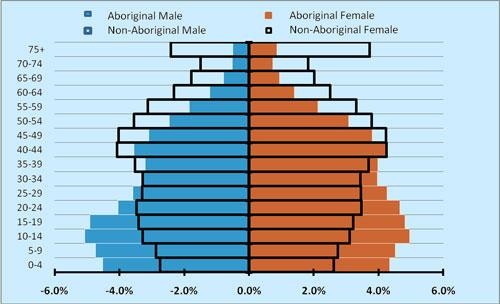 This shows that the birth rate and fertility rate of the aboriginals are much higher than the non-aboriginals.

Compared to non-aboriginals, First Nations and Inuits have a much higher chance of health risks and catching diseases.

Education for aboriginals is poor, but improving.


Crowding was a huge problem that occurred to portions of all three aboriginal groups. This was a cautious problem as crowding can cause an increased risk of infections and injuries, violence and family tension.

All of these problems are related to the way that Canada treats aboriginals. Canada does not provide the same value of funding and treatment to aboriginals as they do to non-aboriginals. Fortunately, not all aboriginals are treated with this level of cruelty. Some live normal lives like an average person.

Future of the Situation with the Immigrants

In 2060, aboriginals will be more accepted. Personally, I think that media will play a part in the respected recognition of aboriginals. Already, Wab Kinew, an aboriginal that makes music, has his own show called 8th fire in which he talks about the mistreatment of aboriginals to give audiences a better understanding of his community. In 45 years, technology will surely evolve and society will as well. With the improvement of technology, Kinew and other aboriginals have a greater chance of spreading the word on equality towards aboriginals. Hopefully it's only a matter of time before this situation becomes noticed because in this day and age, once a controversial topic surfaces, some people fight to make sure that it never disappears. Once this problem becomes more well known, I predict that there will be change. Canada will hopefully treat aboriginals with less hostility by giving them good quality food sources, shelter and education. I also think that Canada will soon realize the dangers that aboriginals face due to the poor living conditions that they are given. Canada will slowly begin to understand that aboriginals need extra help and will start to accept them. Acceptance and kindness towards aboriginals will result in a larger median age for aboriginals, a lower death rate and a higher age expectancy.

Already in this video, it shows that a Canadian organization is being kind to aboriginals. After a flood had occurred and destroyed 200 homes at Siksika First Nation, TransCanada helped out by donating $50,000 to purchase resources that would help the First Nations group. This shows that Canada understood one of the dangers that a First Nations group faced and that they needed help. If Canadians are already starting to help out aboriginals today, then they will for sure be more accepting of them in 2060, thus supporting my prediction. 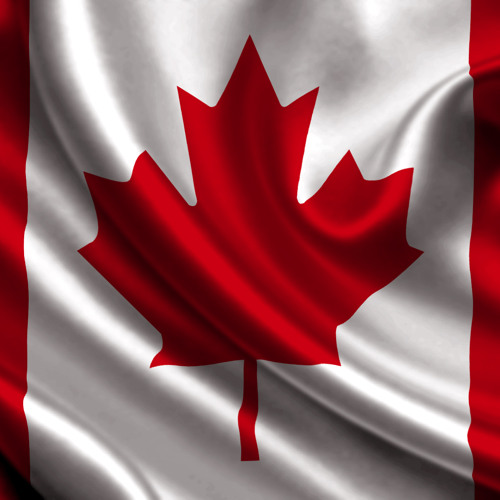 In conclusion, even if predictions don't give an accurate view of the future, using trends to predict, may make an outcome that is close to the result. In 2060, Canada's immigration will become a factor that Canada will heavily depend on, Canada will enter stage 5 on the demographic transition model, and their relationship with the First Nations will hopefully be mended.