The Bill of Rights protects our Civil Liberties

Freedom of speech-We can say what is on our minds without fear of punishment from the government. "Speech" can also mean internet communication, art, music, and clothing (Ex: Mary Beth Tinker)

Freedom of the press-The right to express ourselves in print and media (newspapers, magazines, radio, television) The government cannot practice censorship

Freedom of assembly-The right to gather in groups for any reason as long as the assemblies are peaceful.

Freedom to petition-The right to express one's ideas to the government. A petition is a formal request.

Freedom of speech does not include the right to endanger the government or other Americans.

You cannot interfere with the rights of others.

You cannot spread lies that harm a person's reputation. Spreading lies about a person is called slander and libel.

Americans can practice any faith they wish to 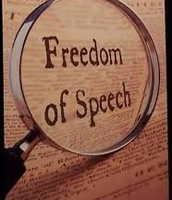 The right to speak freely about issues