Physical properties of Uranium include a boiling point of 4131 degrees Celsius, a melting point of 1132 degrees Celsius, and a density of 18.7 x 103. Chemical properties of Uranium include a half life of 4.5 billion years, dissolves in acid, and reacts with water. A common compound that has Uranium in it is Uranium Oxide. There are two isotopes, Uranium-235, Uranium-238. Uranium is a extremely radioactive and reactive element and is found along the Earths crust. 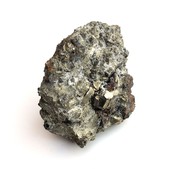 Uranium ore can be found near the earths crust.

The first atomic bomb used in war "Little Boy" was a Uranium-235 powered bomb. It was dropped on Hiroshima on August 6th 1945.

The Curious Case of Uranium

It was a sad depressing day in a small town in New Mexico. Uranium, a small little isotope, had just witnessed the death of his close friend and fellow prisoner Plutonium in a violent explosion his captors called "Trinity". Uranium was very sad, so sad that he cried. Uranium decided he just needed time, and he hoped his sadness would go away in the next few days, but it never did.

Uranium's was sitting in his cell one day when the guard noticed he was crying.

"My best friend Plutonium was murdered and you guys are celebrating!" said Uranium.

"Sorry kid, but we sacrifice the few to save the many" said the guard.

The guard walked on as if nothing happened. Over the next few weeks Uranium developed a cold and a fever. The guards noticed this and were concerned that Uranium would give them all radiation sickness. The guards rushed Uranium to the medical bay.

The guards knew Uranium was very unstable, so they restrained him to a medical bed. Uranium couldn't move and was getting angry. Uranium, already depressed that his best friend had died, was now even angrier. Uranium always knew that he had an explosive personality, but so did the guards. The guards knew that under the wrong conditions Uranium could go kaboom, and kaboom he did. Uranium decided he needed to split ways with life, and an explosion caused the entire facility to blow up. Unfortunately for Uranium, he was no more.