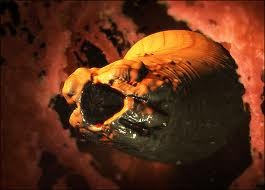 What is a Roundworm?

Roundworms, or nematodes, are parasites that can infect people. They usually live in the intestines. There are different species of worms that can cause infection, and worms can range in length from 1 millimeter to 1 meter. Most often, eggs or larvae live in the soil and get into the body when a person gets them on his or her hands and then transfers them to the mouth. Some can also get into the body through the skin. These worms have the three germ layers, and also it has a body cavity in between endoderm and mesoderm tissue. They have a digestive tract with two openings. The mouth and the anus. So their food can only move in one direction 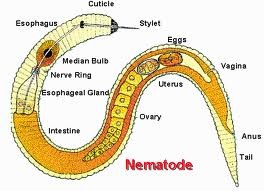 Functions of the Roundworm

The function of the round worm would be more complex than you would think. Round worms have specialized tissues and organs that carry out the needs for the worm.

These worms use grasping mouth parts and spines to catch and eat their prey. Worms in the soil eat fungi, and other pieces of decaying matter. Others just digest bacteria and break down dead animals and plants. 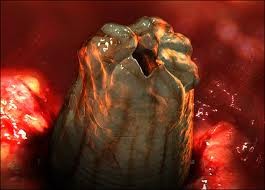 They exchange gases, and excrete their waste out of their body walls. They have no transport system in them. They depend severely on diffusion.

Round worms have a simple nervous system. several nerves run through the entire body. they respond to the environment by detecting their prey and hosts

The muscles of roundworms extend the length of their bodies. Roundworms simply push their way through the environment they live in.

Worms are simply like us, they reproduce sexually. They male worm will deposit its sperm into the female reproductive system. All worms are either male or female. 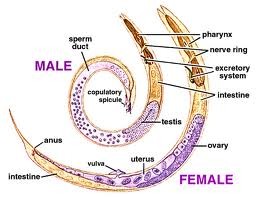 This is a terrible disease that the roundworm causes. These larvae travel through the blood-stream and burrow int organs and tissues causing terrible pain for the host and eventually become inactive in the muscle tissue. The most common trichinella are rats and pigs. Humans can get trichinosis by eating raw or incompletely cooked pork.

These thread-like worms live in the tropical regions of Asia. They house themselves in the blood and lynph vessels of birds and animals. Also, they can infect humans. These worms block the passage ways of fluids within the body. Because of this the worms cause elephantiasis, which is a body part that swells enormously.

These worms are a serious parasite of humans and many other vertebrate animals. It causes malnutrition in more than 1 billion people worldwide. It does this by absorbing digested food from the host's small intestine. Ascaris lumbricoides is commonly spread by eating vegetables or other foods that are not washed properly. Species that are affected are horses, cattle, pigs, chickens, dogs and many other animals. 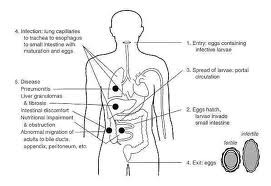 25% of the world is infected with Hookworms. The hookworm legs hatch outside the body and develop in the soil. Humans that are barefoot outside, have a higher chance of having the sharp tooth-like plates hook into their foot and burrow into their skin. They travel through the bloodstream and host onto the lungs or the intestines. They cause a weakness in poor growth. 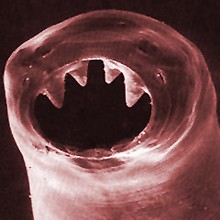 Follow Alicia Matusiak
Contact Alicia Matusiak
Embed code is for website/blog and not email. To embed your newsletter in a Mass Notification System, click HERE to see how or reach out to support@smore.com
close