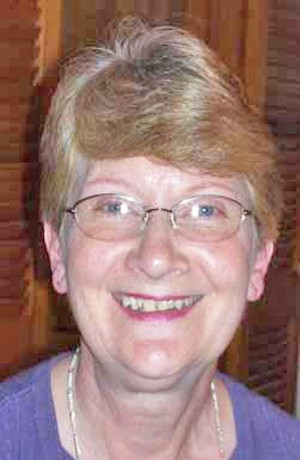 Yes, the new year has arrived --- off and running! A busy time with Founder’s Day, the planning of festivals, recitals and our MFMC convention in Bel Nor, MO (St. Louis suburb) on May 1-2, 2020.

Members of the Perry Musique Club are shown in the right photo below. In the center photo below, pictured from left to right, are Connie Craig, Liza Darr, Debbie Carey, Debbie Hall, Reva Sheffield, and Patti and John Grimmett. The right photo shows a delicious birthday cake served at the celebration. 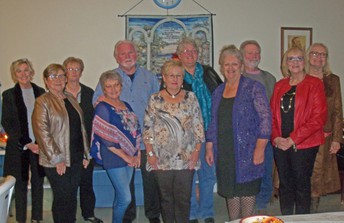 Members of the Perry Musique Club enjoyed their 50th anniversary celebration in November. 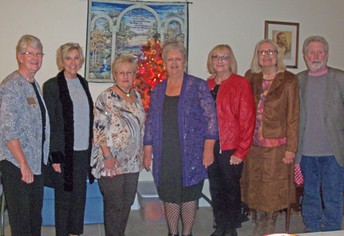 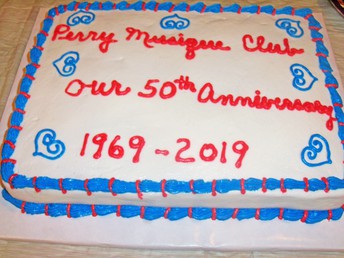 The club was formally incorporated in 1911, and in the same year became affiliated with the National Federation of Music Clubs (NFMC).

The club grew rapidly and departments were established for various instruments and later included one for symphony members. A strong junior department provided a venue for young musicians to increase their skills and perform. Programs were provided throughout Kansas City.

The Kansas City Musical Club has been active in the long and varied history of the fine arts community. One of the places the Club met was at the Athaneum on 31st Street in Kansas City, Missouri. The club hosted a wide range of activities included for youth and for college students. The Junior Club and the Student Division continued into the 1980s.

After conductor Carl Busch presented a program for the club in 1910, the membership voted to provide him with $2,000 to establish the first symphony in Kansas City. This orchestra, called the Kansas City Symphony, was formed in 1911 but was disbanded a few years later when its members (all male) departed to fight in World War I. Later, the Club’s philanthropic donations helped support the beginning of the city’s second professional orchestra, the Kansas City Philharmonic. Hans Schweiger was conductor. One of Club’s members, Marie Roselli, was principal harpist and another, Esther Laughlin, was the second harpist.

The Kansas City Philharmonic orchestra disbanded in 1982, but later that same year a new Kansas City Symphony was founded. It is now in its 37th season.

Membership in the club was either Active or Associate until the 1990s. To be an Active member required an audition. A prospective member had to be sponsored for membership, for both Active and Associate memberships. In 1978 the total membership was around 200.

The club had a long tradition of having a formal tea. The Club owned duplicate tea sets from the 1950s to the 1990s.

The Kansas City Musical Club is associated with Missouri Federation of Musical Clubs as well as with NFMC. Its scholarship concerts have featured artists who won the top award from NFMC.

The Kansas City Musical Club has always had a scholarship fund for college age students. Auditions continue to be held each spring. The winners present a scholarship benefit concert in April. In 2019, the Club awarded seven $1,000 scholarships to area college-level musicians.

In 1969, an annual award was established to honor local individuals who have served the Kansas City area well. The award recipient for 2019 was Frank Byrne, the retiring executive director of Kansas City Symphony.

Some of our city's finest musicians and teachers are members of the Kansas City Musical Club.

Shown below at left is Mrs. W. T. Johnson, one of the Club's founders. In the middle is Carl Busch, the conductor of the first Kansas City Symphony. At right are some of the 2019-20 Club officers, with president Elaine Minden at left. 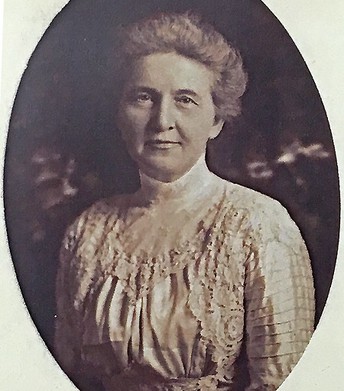 This photo shows one of the founders of the Kansas City Musical Club, Mrs. W.T. Johnson. 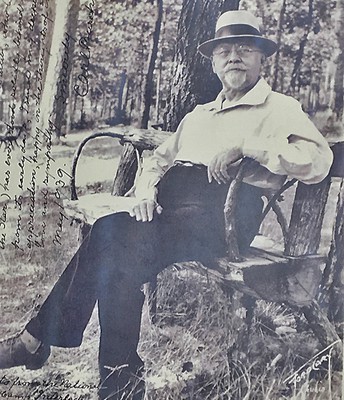 Conductor Carl Busch was the founder of the original Kansas City Symphony in 1911, which he created with the support of the Kansas City Musical Club. 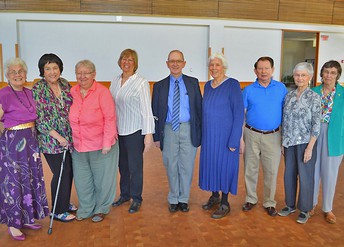 Shown here are some of the 2019-20 Executive Board. President Elaine Minden is at left.

Due Dates for Report Forms

NFMC is interested in what you do throughout the year, so please send them a report form. It only takes a few minutes to complete the form which can easily be downloaded from the nfmc-music.org website under Publications-American Music division or Arts division. Here is a list of forms and their due dates:

Music in Schools and Colleges (Send to Marschnee Strong)

April 15 – Together We Sing (Send to Patti Grimmett)

Save the Dates for These Upcoming Events