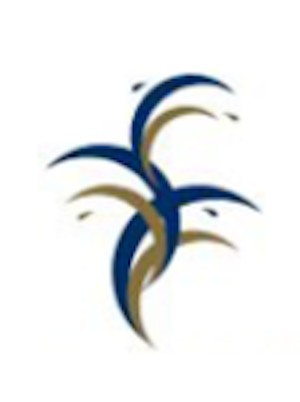 Our Lady of Lourdes School

Get email updates from Our Lady of: 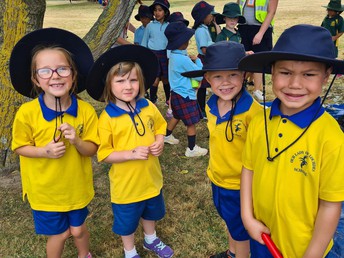 Nau mai, haere mai - welcome everyone to Week Five of our school term.

Thank you for all your support as we navigate once again Level 2. A reminder that all children are to use the front gate and not the driveway to enter and exit the school grounds. We encourage our families to stay at the front gate before and after school to keep our school bubble as safe as possible.

We welcome Pratish, J'ahde, and Zahriya to our school/kura - we are so excited to have you join our kura.

A REMINDER THAT SCHOOL IS CLOSED NEXT WEDNESDAY MARCH 10 FOR A TRAINING DAY.

Last week, Ms Brown and myself attended a conference with our colleagues from all areas of our diocese. Below is some more information about this. We had our juniors excitedly catching a bus to St Joseph's in Feilding for the Year 1/2 Catholic Schools Combined Tabloids. We had Nova in for our Food in Schools programme in the senior rooms followed by a trip to New World. We thank them and our wonderful parents who supported us all during the week.

This week is the second week of Lent with more information below. 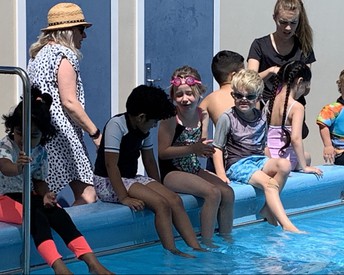 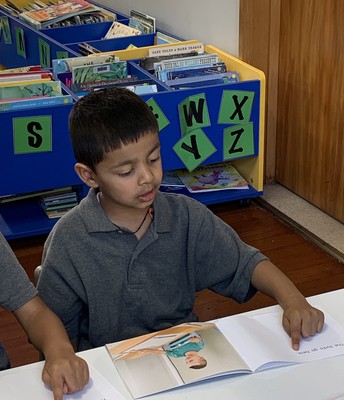 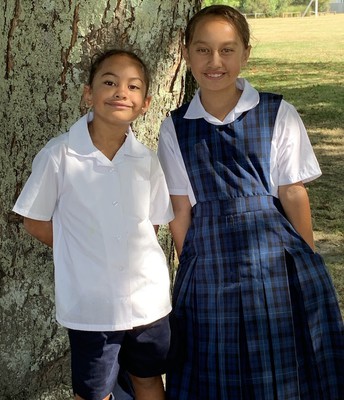 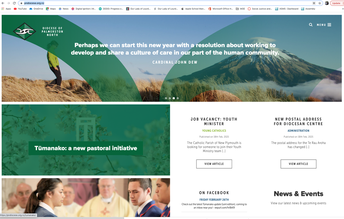 Last week, Ms Donna Brown and myself spent two days with our colleagues from all over the Diocese, our National office and Associate Professor Fr Jamie Calder from Australia (via Zoom)

So what and who is the Palmerston Diocese?

A diocese is the people in a specific region entrusted to a bishop. The Diocese of Palmerston North includes communities in a large region stretching from the northern reaches of Hawke's Bay in the east, under the shadow of Mt Ruapehu to Waitara on the west, encompassing Hawke's Bay, Whanganui, and Taranaki regions following the coast down to Foxton across to Manawatu and Tararua and some of Wairarapa; the diocese is as diverse in geography as its people.

The Priests of the Diocese

The Diocese of Palmerston North is served by its own diocesan priests together with priests belonging to various Religious Orders: The Society of Mary (Marists), Rosminians (The Institute of Charity), The Heralds of Good News, and the Cistercian Monks of Kopua Abbey.

The Palmerston North Education Team works tirelessly for us all...

We focus on walking with people as together we encounter, understand and witness to the love and joy of the living God and the Church.

Through living the virtues of: Whakapono - Faith Tumanako- Hope Aroha- Love we will respond with a generous spirit to every relationship we engage in.

We are a team of Catholic educators working to empower the ongoing transformation of authentically Catholic schools within their faith communities. We do this by walking alongside people, listening to understand, and by providing advice, support, challenge and professional formation.

In addition to these amazing people working along side us there are talented and creative teams who work in our Diocese office to support our schools ... and we truly are blessed to be working alongside them all for the ENCOUNTER, KNOWLEDGE and GROWTH of us all... especially our children/tamariki.

“Life is a journey, along which we must be helped by ‘companions,’ by ‘protectors,’ by ‘compasses’ that guard us against dangers, and from the snares we might encounter along the way.”

E te Atua, God, you call us every day. Open our hearts to your call and lead us on your pathways. Āmene.

Response: The Lord is kind and merciful

With all my heart I praise the LORD,

And with all that I am I praise with his holy name!

With all my heart I praise the LORD!

I will never forget. How kind he has been. (Response)

The LORD is merciful! He is kind and patient,

And his love never fails. How great is God’s love for all

Who worship him? Greater than the distance. Between heaven and earth! (Response)

A reading from the holy Gospel according to Mark 9:2-9

Jesus took Peter, James and John up on a high mountain,

While they were there, a change came over Jesus.

As they were watching him his clothes became a dazzling white -whiter than anyone could wash them.

Suddenly, they saw Moses and Elijah talking with Jesus.

Peter spoke up and said to Jesus,

“Teacher, it is good for us to be here! Let us make three tents:one for you, one for Moses and one for Elijah.”

But Peter really didn’t know what to say because, like James and John he was amazed and frightened by what he was seeing.

Then the shadow of a cloud came over them, and a voice came from the cloud saying,

“This is my beloved Son. Listen to him.”

Suddenly, they didn’t see Moses and Elijah anymore. They only saw Jesus. As they came down the mountain, Jesus told them not to tell anyone what they had seen until he had risen from the dead. So they didn’t. But they kept wondering what Jesus meant when he said he would rise from the dead.

The Gospel reading this week talks about another journey that Jesus goes on, but this time Jesus chooses three of his disciples (friends) to join him for this important event. He chooses Peter, James and John and takes them on a walk up a high mountain. As they walked along, when they got to a place where they were out of sight, they stopped and rested. And at this moment, Jesus’ clothes turned bright white. They were so white, whiter than anyone could wash them.

As his friends watched on, unsure about what was happening, two more men turned up to join them. Their names were Moses and Elijah. You may have heard of these two men; as Moses is the man who led the Israelites out of Egypt and Elijah was a prophet who helped to get rid of false gods and idols so people would know who the one true God was. Even though both these men went up to heaven hundreds of years earlier, there they stood having a conversation with Jesus as if it was not a big deal. Peter, James and John were still in shock at what they were witnessing. Then a cloud appeared above them and God spoke to them. And just as suddenly as it had appeared, it went away leaving just Jesus, Peter, John and James.

This was a special event shared by close companions. We know that at times it was hard for Peter, James and John to be friends with Jesus, dealing with all the crowds and trying to fully understand that Jesus is the Messiah. This event was a wake-up call for Peter, James and John as to who their friend really was. It was Jesus’ way of saying to them, trust in our friendship and all the times they had spent together. 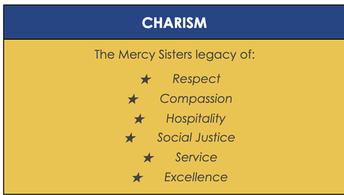 Huufifale for using her Mercy Value of EXCELLENCEby giving 100 % to her work in class.

Joseph for always using his Mercy Value of RESPECT when playing and working with others.

Bailey for using the Mercy Value of COMPASSION by being an excellent friend and role model to her classmates.

Khyri for using the Mercy value of EXCELLENCE in his learning especially in R.E and Maths.

Edith Keenan for using the Mercy Value of COMPASSION by being a fantastic role model in the classroom.

Mason for his Mercy value of RESPECT. He is polite and always offering to help others.

Miley for her Mercy Value of EXCELLENCE in her written language using descriptive language to create a picture in the readers mind.

Luke for demonstrating the Mercy Value of EXCELLENCE by being a role model for behaviour in MahiTahi.

Aron using the Mercy Value of SERVICE by being helpful in tidying up the classroom.

Sana demonstrating the Mercy Value of EXCELLENCE and diligence through always being on task.

BOARD OF TRUSTEES - VACANCY

We have had a vacancy come up for the Parent Representative on our Board of Trustees. Marie Butturini has stepped down from her role on the board. We thank you very much for sharing her gifts and talents with our school community. There is one more year to go before the triennial election next year.

Please see the letter below...

Our Lady of Lourdes Board of Trustees

Casual vacancy for an elected trustee

A casual vacancy has occurred on the board of trustees for an elected parent representative. The board has resolved under section 105 of the Education Act 1989 to fill the vacancy by selection.

If ten percent or more of eligible voters on the school roll ask the board, within 28 days of this notice being published, to hold a by-election to fill the vacancy, then a by-election will be held.

Any eligible voter who wishes to ask the board to hold a by-election should write to: Chairperson Board of Trustees (Maria Amey)

Our Lady of Lourdes school (confidential) 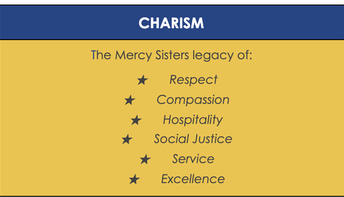 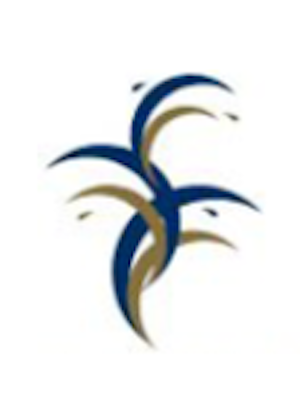 Connect with Our Lady of Lourdes School