Winners of UNLESS Project Announced

Winners of UNLESS Project Announced

The Philadelphia Zoo Announed the Winners This Morning

Both Millbridge Elementary and Delran High School's Green Teams effectively engaged the public about the impact of reducing paper usage on habitats, specifically that of the Red Panda. The Albert M. Greenfield UNLESS Contest was created to inspire solutions and actions to impact the future of wildlife. Over the past four years the Zoo has engaged more than 10,000 schoolchildren from more than 200 schools in the Delaware Valley region as part of this initiative. Two key conservation issues – habitat destruction related to palm oil production and climate change have been the themes of the contest.

During the open application process, Millbridge and DHS Green Teams provided the Zoo with an initial project proposal. Following the application process and over the course of their project, our teams visited the Zoo for a class and participated in a virtual class to learn more about their project topic and how it impacts wildlife. The students had to think critically about a real-world issue that is impacting a number of wild animals.

Final project reports were reviewed by a panel of independent judges who choose the top 20 schools and the final awardees. We are honored to have both Green Teams awarded in their first UNLESS Project challenge!

Students were greeted at the Zoo Balloon with pins and checks for their winnings!

Millbridge Elementary was awarded $750 for their 2nd place win. They were able to reach 800 families through their outreach program. They also included students and staff from every classroom with the Panda Protectors project in every classroom. One child took responsibility for effective paper and waste recycling in their classroom. They collaborated with the DHS Green Team to present at a Board of Education meeting with a skit on waste reduction.

DHS was awarded $250 for their 3rd place win. They were able to reach all the DHS faculty via a Google slide show presentation, including a Pledge to reduce their use of paper. This pledge has created a buzz by the teachers and students to think about their printing and copying, with decreases in the amount of paper used in the copy room. 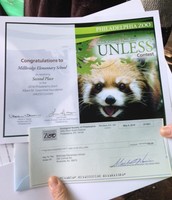 The Green Teams will utilize their winnings to continue the project work begun through the Sustainable Jersey for Schools programs, with student input at the center of their activities.
Paste in your blog/website to embed.
Powered by Smore
Powered by Smore