The Great Depression plunged the American people into an economic crisis unlike any endured in this country before or since. The worst and longest downturn in our economic history threw millions of hardworking individuals into poverty, and for more than a decade neither the free market nor the federal government was able to restore prosperity.

The Great Depression was a severe worldwide economic depression in the decade preceding World War II. The timing of the Great Depression varied across nations, but in most countries it started in about 1929 and lasted until the late 1930s or early 1940s.[1] It was the longest, most widespread, and deepest depression of the 20th century.
Get Directions 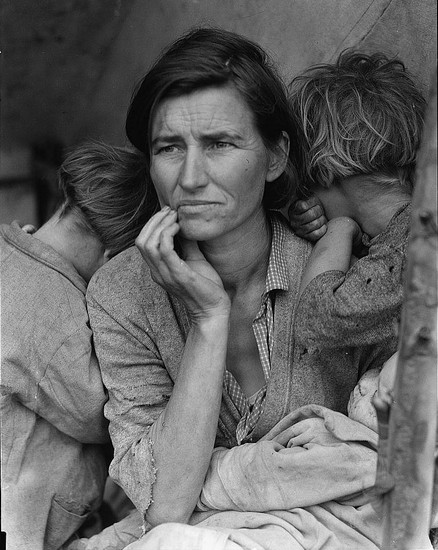 People demonstrate outside of the Bank of the United States in 1931 after it failed.

An affected town turns others away.

During the drought of the 1930s, without natural anchors to keep the soil in place, it dried, turned to dust, and blew away eastward and southward in large dark clouds. The Dust Bowl, or the Dirty Thirties, was a period of severe dust storms causing major ecological and agricultural damage to American prairie lands in the 1930s, particularly in 1934 and 1936. The phenomenon was caused by severe drought coupled with decades of extensive farming without crop rotation, fallow fields, cover crops or other techniques to prevent wind erosion.

These immense dust storms—given names such as "black blizzards" and "black rollers"—often reduced visibility to a few feet. Millions of acres of farmland were damaged, and hundreds of thousands of people were forced to leave their homes; many of these families (often known as "Okies", since so many came from Oklahoma) migrated to California and other states, where they found economic conditions little better during the Great Depression than those they had left.

Owning no land, many became migrant workers who traveled from farm to farm to pick fruit and other crops at starvation wages. Author John Steinbeck later wrote The Grapes of Wrath, which won the Pulitzer Prize, and Of Mice and Men, about such people. 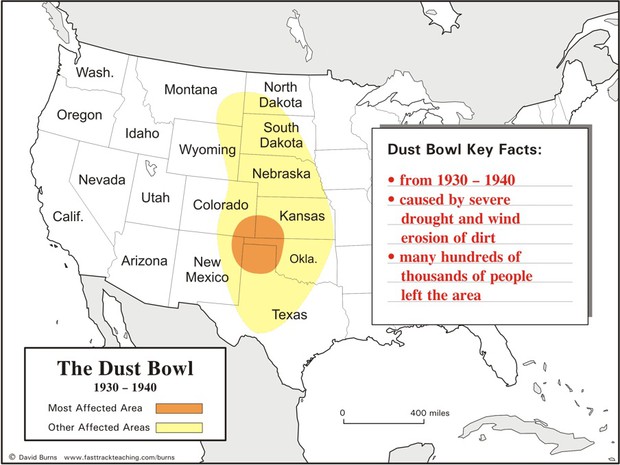 The aftermath of dust storms. 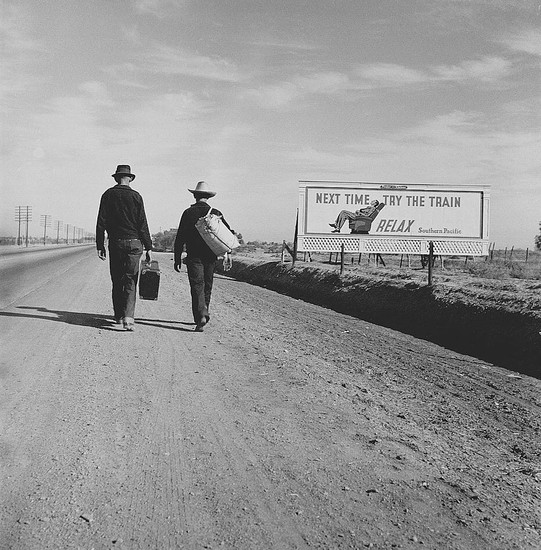 Evicted sharecroppers on the side of the road, Parkin, Alabama, 1936.

A homeless family looking for work.

A Decade of Misery

By the middle of the 1930s, as the American people endured half a decade of misery with no end in sight, some began to flirt with much more radical alternatives to the liberal reformism of the New Deal. For perhaps the only time in our history, American capitalism broke down so badly, and for so long, that radically different ways of organizing society became not only thinkable, but for some, desperately desired.