The domestic pig typically has a large head, with a long snout which is strengthened by a special prenasal bone and a disk of cartilage at the tip.[2] The snout is used to dig into the soil to find food, and is a very acute sense organ. The dental formula of adult pigs is 3.1.4.33.1.4.3, giving a total of 44 teeth. The rear teeth are adapted for crushing. In the male the canine teeth can form tusks, which grow continuously and are sharpened by constantly being ground against each other.[2]

There are four hoofed toes on each foot, or trotter, with the two larger central toes bearing most of the weight, but the outer two also being used in soft ground.[3]

Most domestic pigs have rather a sparse hair covering on their skin, although woolly-coated breeds, such as the Mangalitsa, are raised.[4]

Pigs possess both apocrine and eccrine sweat glands, although the latter appear limited to the snout and dorsonasal areas.[5] Pigs, however, like other "hairless" mammals (e.g. elephants, rhinos, and mole-rats), do not use thermal sweat glands in cooling.[6] Pigs are also less able than many other mammals to dissipate heat from wet mucous membranes in the mouth through panting. Their thermoneutral zone is 16 to 22 °C.[7] At higher temperatures, pigs lose heat by wallowing in mud or water; although it has been suggested that wallowing may serve other functions, such as protection from sunburn, ecto-parasite control, and scent-marking.[8]

Pigs are one of four known mammalian species which possess mutations in the nicotinic acetylcholine receptor that protect against snake venom. Mongooses, honey badgers,hedgehogs, and pigs all have modifications to the receptor pocket which prevents the snake venom α-neurotoxin from binding. These represent four separate, independent mutations.[9]

Pigs are exhibited at agricultural shows, judged either as stud stock compared to the standard features of each breed, or in commercial classes where the animals are judged primarily on their suitability for slaughter to provide premium meat. According to The Livestock Conservancy,[57] seven breeds of swine in the US[citation needed] are critically rare (having a global population of fewer than 2000), as are the Auckland Island Pig(New Zealand) and woolly-coated grazing pig (Danube area). 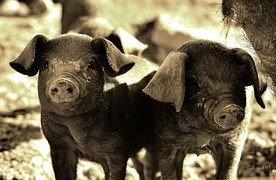