NOW SHOWING THROUGH THE MONTH OF MAY!!

The Venus of Urbino 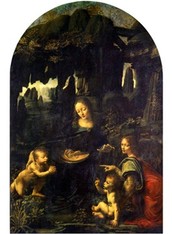 Virgin of the Rocks

Leonardo da Vinci actually painted two pieces of the same name with similar subject matter, the piece displayed, is the Louvre version. The alternate version, the London version, is simply painted with difference in colors, light composition, and flora.

The piece depicts the Virgin Mary, the Christ Child, the infant John the Baptist, and an angel in a rocky setting. This piece is regarded as a prime example of Leonardo's sfumato style.

Leda and the Swan

This piece comes from the Greek mythology about Zeus seducing Leda, the wife of Tyndareus the king of Sparta, in the form of a swan. Leda bears Helen and Polydeuces, children of Zeus, in addition to Castor and Clytemnestra, Tyndareus' children, in two eggs.

Rubens' piece is thought to be inspired by Michelangelo himself. The form of the female body is mirrored of Michelangelo's style, while the theme, is a common Renaissance Baroque subject of females in love with divinities.

The Wedding at Cana

This piece depicts an Old Testament story of miracle. Jesus and his disciples attend a wedding feast in Cana when the wine runs out. Jesus then turns jugs of water into wine.

The architecture shown is classic Greco-Roman with Doric and Corinthian columns. Instruments in the piece are of the Renaissance age. Behind the musicians, Jesus Christ and the Blessed Virgin Mary are shown seated with halos. As tradition holds, Veronese painted himself into his piece. He is shown in a white tunic and holding a viola. The artist Titan is seated across from him in red. Many kings, queens, and popes are thought to be portrayed as some of the subjects, but, nothing confirmed.

This piece depicts the the god and goddess, Mars and Venus, as a youthful and voluptuous couple reclining in the forest and surrounded by playful satyrs. The painting portrays the ideal of sensuous love and of pleasure and play. Over Mars' head, there are wasps, thought to be a symbol of the pain that comes with love.

The scene has an extremely tight and compact horizon and sense of perspective. Yet, in the distance you can still see the sea from which Venus was born from.