Musical Term of the Day:

CANON: A canon is a piece of music in which two or more voices (or instrumental parts) sing or play the same music starting at different times. A round is a type of canon, but in a round each voice, when it finishes, can start at the beginning again so that the piece can go “round and round”.

After a brief sabattical, the Marching Commodores will be making their debut at the first home Football game on Friday, August 19th. This year's show is called "Lights". We will be performing three songs; Firework, Burn, and My Songs Know What you Did in the Dark. Students worked tirelessly during two weeks of Band Camp at the end of July and are excited for their first performance. Practices for the Marching Commodores take place on Tuesdays and Thursdays from 3 to 4:30, and also on Fridays before home football games.

As many of you know, the Band Boosters are responsible for all Fall Sports Concessions. The funds that we raise in the fall are instrumental to the success and growth of our program. A letter regarding Fall Concessions was passed out during the 2nd week of Band Camp. Students are responsible for three concessions and parents are also responsible for three concession events, one of which must be a Varsity Football game. Deadline for signups is Friday, August 5th. Feel free to contact me, or Band Booster President Angie Foe at cafoe@psci.net or (812)843-4799 if you have any questions. 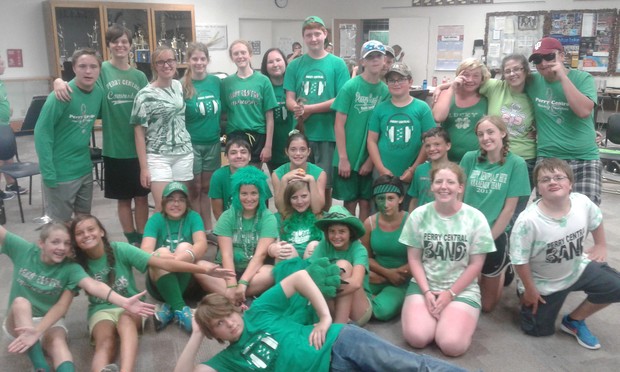