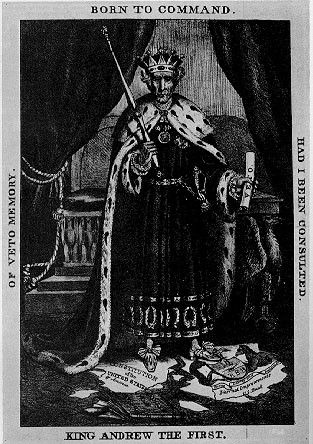 President Andrew Jackson vetoed the Maysville Road Act sponsored by Henry Clay on May 27, 1830 authorizing the federal government to provide funding for the construction of a road connecting Lexington, KY to Maysville, KY on the grounds that it was unconstitutional secondary to his belief that it was a local issue rather than a national one. The Maysville Road supporters argued that Henry Clay’s American System endorsed the idea of improving the country’s infrastructure as a way to unify the United States. The United States Congress apparently agreed as they passed the funding for the United States to purchase stock in the Maysville, Washington, Paris, and Lexington Turnpike Company which would fund the Maysville Road. President Jackson, however, believed strongly in limited federal government and states’ rights and felt that since the project was entirely within one state, the federal government was not authorized to fund it. Jackson’s administration was also concerned that the country could not afford to pay for many improvement projects. In addition, the veto might have partially resulted from Jackson’s personal feelings rather than strictly facts. Jackson’s Vice President Martin Van Buren was from New York and he argued that New York and Pennsylvania had paid for their transportation improvements with local and state money. Buren also favored protecting the Erie Canal’s trade advantage. It was suggested that President Jackson also vetoed the Act because of his adverse personal feelings toward Henry Clay.

The veto supported the idea that federal tax money should only be used for projects that benefited the entire country, for example the national debt or transportation between states versus projects within one state. Jackson’s veto established a strong policy of using federal funds only for interstate projects or harbors that served foreign trade. The idea of limiting the scope of the federal government became a hallmark of Jackson’s administration and his followers. By use of the veto, Jackson also expanded presidential authority. He vetoed twelve bills, more than the first six Presidents combined. His opponents dubbed him “King Andrew” for his liberal use of his power and formed a new political party, the Whigs, against him. The Maysville Veto was an example of his belief that the federal government should be small, frugal, and accessible to the people.