The true story of

The true story of

Corey’s witchcraft accusation came shortly after his wife was arrested and put on trial for witchcraft in March of that year. The 80-year-old farmer’s own trial never moved forward and he was never convicted because he died while being tortured by Sheriff Corwin that September (Brooks). Ann Putnam, Jr., Marcy Lewis, Abigail Williams, Mary Walcott and Elizabeth Hubbard accused Giles Corey of witchcraft in April of 1692. He pleaded "not guilty" but refused to be tried by the court which, in his view, had already determined his guilt, so he stood mute rather "putting himself on the country." He was sentenced to peine forte et dure, which was other terms for being crushed to death by stones, even though it was an illegal punishment, and ended up being torturously crushed to death on (or before) September 18, 1692. One of the major factors which made Giles Corey a prime target was not only his relationship with the rest of the community but also his past encounters with the law, including a prior conviction for murder. His chosen means of resistance and dramatic death reveal a strength of character that playwrights, from Longfellow to Arthur Miller, have found irresistible (Ray). Giles was accused of witchcraft by many people during these times and even though he was accused, he would not be a coward and admit to being something he is surely not. Giles was killed by huge stones and crushed him to death which was a legal tactic.

The Curse of Giles Corey

Did you know that Giles Corey had previously been accused of murder prior to the witch trials? He was not a very liked man and girls would call him "a dreadful wizard" to recount the stories of assaults he had also had too. (umkc.edu)

A sketch of Giles Corey in the Salem court 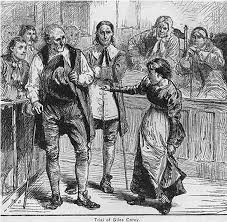 The famous line said by Giles