The pioneer of non-violence, believed in simplicity

The pioneer of non-violence, believed in simplicity

Mohandas Karamchand Gandhi was born on the 2nd of October 1869 in a place called Porbandar in Gujarat. Mohandas was the last child of his father (Karamchand Gandhi) and his father's fourth wife (Putlibai). During his youth, Mohandas Gandhi was shy, soft-spoken, and an average student at school. He was generally a good child, but as he was trying to find independence, Gandhi experimented with eating meat, smoking, and a small amount of stealing, which he later regretted. At age 13, Gandhi married Kasturba (also spelled Kasturbai) in an arranged marriage. Kasturba had four sons to Gandhi and supported him in his plans until her death in 1944. 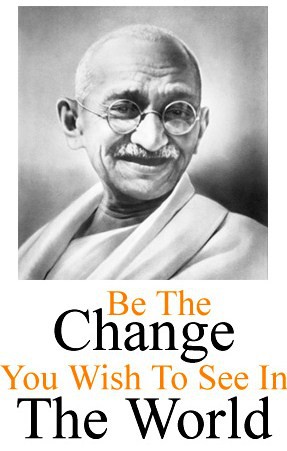 What Gandhi did and why he did it....

Gandhi encouraged Indians to boycott British goods and buy Indian goods instead. This helped to keep local economies alive in India. Gandhi did not believe in violence to get what he wanted and used this method whilst fighting with the British. He knew that if he used violence it would only create a negative reaction whereas if he went about it a non-violent way it would push more people into supporting the Indian National Congress movement.

Gandhi was imprisoned in 1922, 1930, 1933 and in 1942. While in prison, he went on a hunger strike. His fame was so big, that his death in prison would make international headlines and greatly embarrass the British.

In 1931, Gandhi came to Britain for the Round Table conferences. Nothing was achieved except for the publicity that Gandhi received for dressing in the clothes of an Indian villager; Gandhi saw this type of dress as perfectly normal for a man who represented the Indian people. The British representatives at the conference were dressed in formal clothes.

When in India, Gandhi took on the British where possible. His famous walk to the sea to produce salt was one of these.

Gandhi is arrested by the British and tried on a charge of conspiring to overthrow the government. He pleads guilty and is sentenced to six years imprisonment.

In 1930, Mahatma Gandhi proposed a non-violent march protesting the British Salt Tax. The Salt Tax essentially made it illegal to sell or produce salt, allowing a complete British monopoly. Since salt is necessary in everyone's daily diet, everyone in India was affected. The Salt Tax made it illegal for workers to freely collect their own salt from the coasts of India, making them buy salt they couldn't really afford. This in turn put some Indians in a health threat as those who were too poor to buy it didn't.
Before Gandhi began his journey, he wrote a letter to Lord Irwin, the viceroy, to inform him of his course of action. This letter was part of Gandhi's philosophy of nonviolent action in hopes to work out a solution. However, Lord Irwin did not reply and Gandhi began his expedition. Gandhi successfully completed his march to the sea with his 78 followers. When Gandhi reached Dandi he picked up a small chunk of salt, this is against the British law. Soon after, thousands followed Gandhi's example and picked up salt off the coast. A month after Gandhi completed his march he was arrested for breaking the law and soon after India's prisons were full with other Indians who had followed his lead.

During the Salt march

There was one assassination attempt on Gandhi on January 20th 1948 which failed. Just ten days later on the 30th January, he was assassinated by a Hindu fanatic who could not forgive Gandhi for his belief that Muslims had equal value to Hindus and no-one was better than anybody else.

Gandhi, although dead now, is still spiritually alive now. He still lives on in peoples hearts and many of his quotes are still looked upon. He was able to show the world that no matter who or what you are, you are no different to anyone else and everyone should be treated fairly. Whether you're black or white, Indian or British, male or female you are equal to everyone else in the world.

"Woman is the companion of man, gifted with equal mental capacities. She has the right to participate in the minutest details in the activities of man, and she has an equal right of freedom and liberty with him." - Mohandas Gandhi 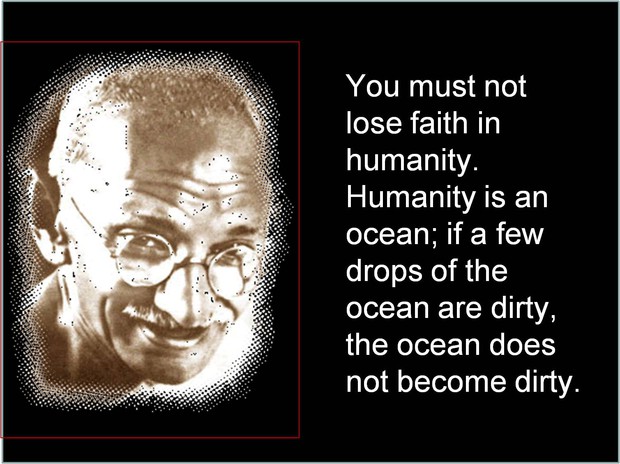 Gandhi's effects to our world

Besides Gandhi's political and media influence through the movement, Gandhi had a much more deeper effect. The main objective in Gandhi's movement was nonviolent protests. Not only did Gandhi complete his objective of nonviolent behavior but he created an example of thousands of followers who did the same. His goal was to make change without hurting others others. When his followers also broke the law, they were beaten by British police before being arrested; all remaining nonviolent. This movement also was an influence on future nonviolent protests, such as those of Martin Luther King who held Gandhi as a role model. Martin Luther King practiced Gandhi's similar philosophy, of peace to gain peace and justice, through the Montgomery bus boycott. Gandhi not only made an example of change through nonviolence for his time, but provided a model for generations to come.

Well many could say that Mohandas Gandhi was just trying to be the centre of attention or wanting to go against the British for no realistic reason. But if you think about it, he has helped shape the world to what it is today. His choices and methods have been an inspiration to many, including Martin Luther king jr. He has shown us that we can have a voice and show that we are against something in a non-violent manner. He helped us understand the fact that no matter who or what we are, we are no different to anyone else. Gandhi's ways of going about things were unique and different, thus making a little more fame for himself and probably making his protests more effective. He was able to influence not only his country but the world.
Many of his quotes have been able to stand the test of time, and are most probably the centre of some peoples lives today.
The world (now and in later years) should take Mohandas Gandhi's actions on board and make them their own. They should learn from his peaceful protests and his caring demeanor and 'Become the change they wish to see in the world!'

Facebook
We are the team behind this page...
Hope you enjoy :)

Follow Chloe Morgan
Contact Chloe Morgan
Embed code is for website/blog and not email. To embed your newsletter in a Mass Notification System, click HERE to see how or reach out to support@smore.com
close