Get email updates from Breanna:

A little about me!

I've went through a lot and decided to share a few major events but before i get started I'm going to tell you a little summary of myself.

I was born in Catawba, North Carolina, this is where I lived for about a year of my life. Then on my first birthday my mother and I moved to Rothenburg, Germany, where my mother grew up, when we got there we had nothing or pretty close to it. But we moved to be with my great grandpa before he passed. When I was about 7, we came back to the USA, and lived in Kentucky for 8 years. The transition was hard because my first language is German and I had to learn English. After all the programs i was tossed around in, I finally can speak good English. At the age of 15, we moved back to North Carolina and I've been here ever since and accomplished a lot of my goals and failed myself along the way too.

I graduated from University of North Carolina Charlotte, with a major in Computer Security and a minor in Computer Technologies, when I was 23. But while I was in college, I partied hard and stayed drunk. BEST TIME EVER! Then, I almost got kicked out and decided I needed to stay on track. Finally, I graduated and continued with my life.

When I got hired at Check Point, I was extremely happy. Then about a year passed and I started to take my job to lightly and started to slack off. The boss kept coming to me and telling me I'd better straighten up or I would be gone and he would have someone fill my place faster than I could say sorry. I didn't really take him too seriously because, I mean, he was cool. After a few months, I started doing drugs and I got hooked. Next thing I know I'm getting fired for my poor attendance at work. The days after were hard.

My first baby and ALONE!

When I lost my job, I lost all the income I was making. So, I started to do things for drugs, things I would have never ever done. But the addiction got the best of me. After a few months, I found out I was pregnant and like my job, I took it lightly because I didn't care and continued to do drugs. I didn't and still don't know who the dad is but I had the baby anyways. When Kaiden came into this world, I was horrified. He had multiple birth defects and was close to dead. He's 14 today!

After I had Kaiden, I continued to do drugs and made life worse for me and Kaiden, After a few years of me neglecting my motherly duties, i was taken to jail for Drug Trafficking and Child Neglect and Endangerment. I will spend 30 to life in jail and will never get to get Kaiden again. 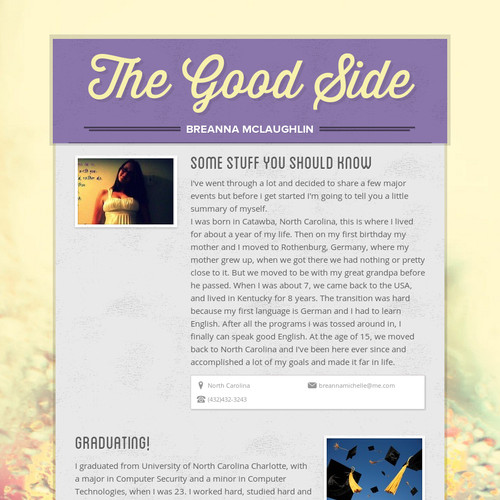 smore.com
I've went through a lot and decided to share a few major events but before i get started I'm going to tell you a little summary of...