Learn about Vaping and its dangers....

Learn about Vaping and its dangers....

Update 4/5/18 - originally this Vaping newsletter was designed for the Wachusett Regional High School community.However, after its release, this newsletter was shared again and again, and so far has amassed almost 200k views across the U.S. and beyond. Clearly this is a problem that places outside of Holden, Massachusetts are dealing with. I hope this newsletter is helpful - whether you're a school employee, health care provider, parent, student, or just a concerned citizen, please feel free to share wherever you are.

Long gone are the days where we might walk down the hall, following a scent trail reeking of tobacco, leading into the bathroom where a student can be found smoking a cigarette.

Today, we are much more likely to encounter weak hints of strawberries, oranges, and bubblegum as students leave their class for a "bathroom break" and take a quick hit from their "vape."

The consequences for both are the same: a school suspension. But students are often surprised because, as they say, "vaping isn't harmful." Parents often wonder about this rule too. In the "old days" if we confiscated cigarettes from kids, parents would ensure they were thrown out. These days, parents are often picking up the vapes/E-cigarettes that we confiscated and turning them back over to their children, because they've been told that it's "just water vapor" or simply "smells like watermelon."

But is vaping safe? We know it isn't and wanted to share some important resources with you. With these new technologies, it's hard to keep up so we wanted to do our best to help.

What is a vape? There are three major components..

This is a box of vapes and paraphernalia that was confiscated from students in a short time period. 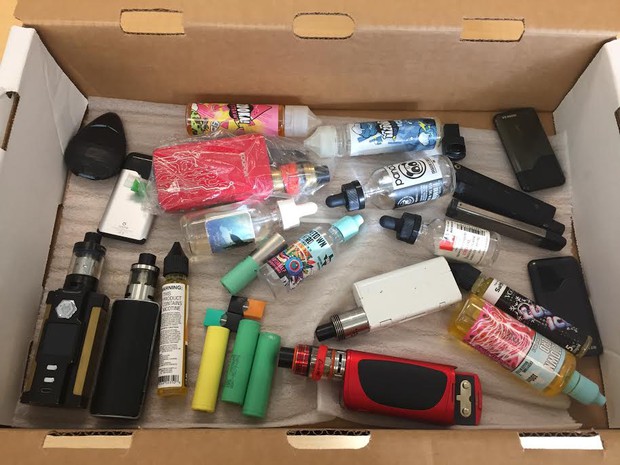 How an E-cigarette works

E-cigarettes create an aerosol by using a battery to heat up liquid that usually contains nicotine, flavorings, and other additives. Users inhale this aerosol into their lungs. E-cigarettes can also be used to deliver cannabinoids such as marijuana and other drugs.

Vaping and its Impact on our Bodies

Vaping has been linked to chronic bronchitis (aka smoker's cough), bloody sores, lung wounds that won't heal, and even cancer. Check out this article for more information.

The picture below demonstrates a potential risk of vaping - popcorn lung. Popcorn lung is a serious lung disease linked to a chemical that is used in some vaping liquids.

More information about it can be found here. 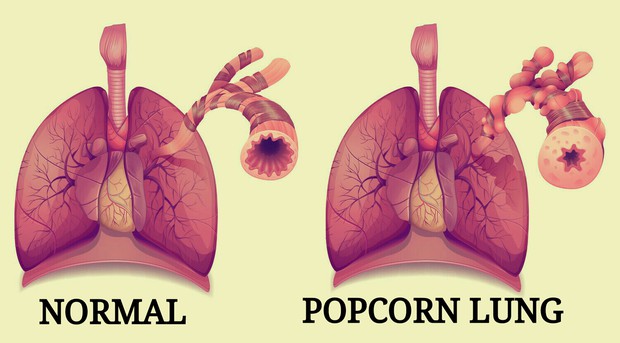 How does the nicotine in e-cigarettes affect the brain? Until about age 25, the brain is still growing. Each time a new memory is created or a new skill is learned, stronger connections – or synapses – are built between brain cells. Young people's brains build synapses faster than adult brains. Because addiction is a form of learning, adolescents can get addicted more easily than adults. The nicotine in e-cigarettes and other tobacco products can also prime the adolescent brain for addiction to other drugs.

An article on a new vaping tool

An article about an exploding vape on a Massachusetts school bus