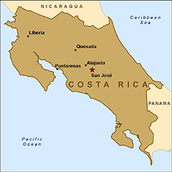 The People You Will Meet!-People

Descendants of Spanish and indigenous colonizers.

The people that live in this country are diverse.

Roman Catholicism is the most common religion.

Spanish is the official language.

Socialability is important. Everyone should be greeted individually.

Young girls are accompanied by a relative to travel aboard

Most people live with their parents at least until they're married.

Hydroelectric dams give more then 80% of this country's electrical needs.

Populations of tuna, and other Pacific fish are stable.

Oil has not been extracted.

Bananas, coffee and pineapples are exports.

They have a value that everyone should be greeted. The people are diverse. God parenting is common. A catholic priest or a civil represenitive must conduct a marriage. Young girls are accompanied by a family member for travel. Most social interaction is with family. People live with their parents at least until they are married. Christmas and Christmas Eve is celebrated. Costa Ricans dress nicely, especially the women. Their style is similar to the U.S. Seems like a interesting place!

One of the most stable and democratic countries in Latin America.

Canada, Europe, and the U.S. are all attracted to the beauty and affordable living.

20% of all households are headed by a single female.