Birmingham is a city that was founded in 1871 in was a popular place for blacks to got and it was in the middle of the biggest KKK operation and non members and black were beet ion badly. After the speech of "I Have A Dream" by Marten Luther King Jr. thats when the bombings started. When king was in the Birmingham jail he wrote a letter that they should not call of the decomstration in the face of more bloodshed. This was the famous letter from a Birmingham jail. In the bombings there was four children that were killed in the bombing most of the people were there for sunday school or church related things. Most people were shocked and they found the people that did in but they ether ran away or were killed.

What was left after the bombing. 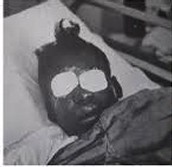 A little girl that was in the bombing is in the hospital.