Geography has always been the thing changing the tide in the greatest of all civilizations ever. Being just lucky is not enough to survive and thrive. But being geographically lucky can change the tides in war with the elements. Having the river and the valley was a huge part, but their are other major factors in that situation.

The building of the Indus Civilization were made mainly out of mud-bricks. They were starting to lay drains and dig wells. The river and the valley made there civilization very geographically lucky. Why, you might ask? Well having lots of controllable flowing water made it a lot easier to grow crops and have livestock. That brings me to my next thought. Their civilization was in a primary place for livestock. They had enough water and food to take care of cattle, pigs, sheep, and goats for meat, milk, and wool. Also they were farming dates, grapes, melons, and field crops like wheat and peas. The river could be used for irrigation systems to help with the productivity of those certain crops. They could manipulate the water supply to quench the needs of life giving water to crops and livestock, in the right amounts. The Indus river was a huge find for the Indus People. It was a source of water that stretched for over 3000 kilometers! Some of the major cities were Harappa, Moenjdaro, and Mehrgarh were weaving throughout the branches of the Indus river. But being so luck always has disadvantages. Being close to the himalayas and the sea is not so lucky. Warm air from sea, cold air from mountains. Tornados, not so lucky there.

At 2500 BC the population rose to between 1 and 4 million people in the valley. Having few major cites, it had to be very hard to have found places for everyone! The Indus Valley Civilization was located where Pakistan is today, and was a huge success between 3300 BC and 1300 BC. The major cities were intertwined with the long Indus River. Making it easier to find water but harder with the raised percentage the chance of flood.

It really depends on everything including how they act when the time comes. No-one knows whats coming until its there (Unless their physic). The Indus Civilization sounds good, so far, but things could change at the last moment, so they better be ready!

The Indus Valley civilization was quite peaceful. They people are considered Hindus by some historians. That's a polytheistic culture so they believed in multiple gods. Ritual dancing has been assumed because of the dancing girl of Mohenjodaro. The Indus people would were amulets for protection against magic and superstitions. The Indus valley social hierarchy would've gone something like this; leader/priest (It is possible the Indus people where ruled by priests) - traders-farmers- 'poo cleaners'. Many of the Indus people were either farmers or traders. Although the Indus valley civilization was big it unclear if they were ruled by kings. The sewage from toilets were drained into pits which were cleaned by the' Poo-cleaners'.

Some things that the Indus valley civilization had that was advanced were the tools they used. They had hammers, knives, needles, fish-hooks and more. Although, most of the tools they used were made from flint. The Indus Valley also had the most modern and complex drainage systems, wells and storage systems in the ancient world. Many households consisted of a toilet and a well! Some even had there own private bathhouse!

Food was an Important aspect of society for the Indus people. The farmers may have grown rice but so far it is a mystery. They grew sesame, millet and most likely cotton as well, all in the summer.. There grew mustard, linseed, lentils, peas, barley, and wheat all in the winter. Water plants and trees were also important aspects for the Indus culture.

Sanskrit was the language the Indus people spoke. The Indus people wrote in the form of seals which are similar to clay. The seals consist of an average number of characters being 5. They are not complex or long and don't have multiple languages. A person who already new how to write and read would teach the children.

The Dancing Girl of Mohenjodaro 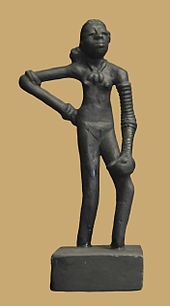 Its possible that the Indus people were happy without a king or they controlled everything. This civilization was very large but we us humans don't know if this civilization had any kings. It might seem that nothing there ever changed there for 100 years. Life went on the same way for generations. New houses were built on the old houses, also the city street plans stayed the same.in 3300 BC, farmers builded villages in the Indus valley. In 3200 BC, the Indus people have their own writing, and then in 3000 BC, there were cities in the Indus valley.The Indus cities were at their richest between 2600 and 1900 BC. Between 1900 and 1700 BC, this great civilization started to fall apart.Trade with Mesopotamia stopped. Archaeological evidence shows how things got worse. The Great Bath at Mohenjo-Daro was built over. The city mounds got overcrowded. Drains blocked up. Some traders even hid their valuables under the floors of their houses! People stopped repairing old homes.

Of course these people didn't just magically have everything they needed just siting in front of them! They got busy really quick. Otherwise they won't have such a successful city. You can't just make a civilization laying around being lazy. You have to work hard to achieve your goals. Making a successful civilization is one big goal.

For every good start there's a good foundation. The builders in this civilization made brick walls for buildings. The brick buildings, and walls help prevent flooding waters to get into homes of the Indus people. They did have a river next to their city. Brick is also good for protecting against strong winds.

Trading was a big part the Indus Valley civilization. The traders brought back important materials for many different jobs such as supplies for city workers, gold and sliver, and colorful gems for currency. The Indus people traded with many different civilizations around them. They brought the city workers' creations with them to trade. This was part of a cycle. Traders bring home supplies, city workers make creations with the supplies, traders take the creations to trade, traders trade the creations for supplies.