V and Murrow’s speech are inspiring, and impactful. They want their citizens to realize the corruption that’s going on within their country, and remind them do something about it.

V was explaining to his country how they’ve been robbed of their senses by telling the citizens about the corruption of their government. It explains how it their faults and they can take action to fix it. He also explained how the government has become a dictatorship over the years, tricking them into thinking they’re being protected. The government has stripped away their freedom as citizens. V wants to wake them up and remind his country what they’ve forgotten by reminding them of November 5th. He hopes that the citizens will realize they need freedom and justice.

Murrow focused on how we block out the negative and disturbing information in our world when we really do need to know the harsh problems and help change it for the better. He brought up how comfortable and distracted we’ve been. Seeing how we’ve moved towards entertainment to relax, rather than watching news recognizing the problems to help fixing them. Murrow wants us to wake up and recognize what’s wrong in our world today and do something productive to change it, rather than deliberately ignoring it.

V’s and Murrow’s speech’s have real and similar ideas that support one another. They both want people to wake up and realize the problems that are affecting them. V states, “There is something terribly wrong with this country.” And Murrow also states,” We are currently wealthy, fat, comfortable and complacent.” They’re letting citizens know how comfortable they’ve become and need to fix the problems within the government. Secondly, both V and Murrow have differences throughout their speech’s. V wanted to save his country from a dystopian society and tried to do something about it. An example was when he said, “If you would seek as I seek, then I ask you to stand beside me one year from tonight.” On the other hand, Murrow is trying to save the American people by asking them to not block out the negative problems, yet he’s not taking any action to do something about it like V did. That’s how V and Murrow’s speech’s are similar yet different.

V and Murrow’s speech have made an impact on listeners, inspiring them to change the problems that are so easy to see. If we listen to their advice, we as a nation can overcome. 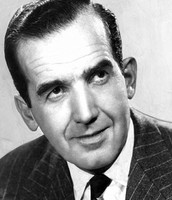