The Diary of Anne Frank

The Diary of Anne Frank

The theme, showing courage when faced with obstacles is shown through out the diary of Anne frank. Anne and her family show courage by going into hiding. For example Anne saying "at five o'clock this morning mother woke me and told me to hurry and get dressed. I was to put on as many clothes as I could. It would look suspicious if we walked along carrying suit cases"(372). This shows courage because they know they can be killed. though knowing the risks of getting arrested or killed by nazis, Miep and Mr. Kraler showed courage by helping the Franks and the Van Dans. An example is when Miep says," I made up the beds....... The way Mr. Kraler and Frank said. Forgive me. I have to hurry. I've got to go to the other side of town to get some ration books for you"(374). The final example of courage is when the franks and the van dans hear a thief in the building, and decide to stay, even though the thief could go tell the nazis. For example, Mr. Frank says,"have we lost all faith? All courage? A moment ago we thought that they would come for us. We were sure it was the end. But it wasn't. We're alive and safe. We thank thee,oh lord our God, that infinite mercy thou hast again seen fit to spare us. Come on, Anne. That song! Let's have the song!(408)

We must show hope when times are tough is shown through out diary of Anne frank. They had hope by hearing about the invasion. One example is when Miep says," the radio...... The BBC! They said they landed on the coast of Normandy!(428)

The megaphone represents Anne in the play. In the diary of Anne Frank, Anne is really loud. When Anne gets excited, she talks really loud. For example Anne says," father! My movie stars! I was wondering where they were! I was looking for them this morning.... and Queen Wilhelmina! How wonderful!" (379) Another example is when Anne gets Mouschi. Like when Anne says, " Mouschi! Mouschi! Mouschi!(377) That proves she is loud because she yells out the cats name. The last example is when Anne gets mad at Peter and yells him name. For example, Anne says, " Peter!"(383) That shows Anne is loud because she is yelling. These examples show that she represents a megaphone. 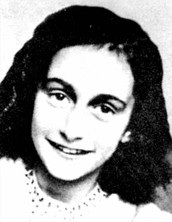 Anne Frank was born on June 12, 1929 in Frankfurt, Germany. She went into hiding with her family and the Van Dans. Anne died on 1945, in Lower Saxony, Germany.

Anne got transported to a concentration camp and died. Her diary got published on 1947.

Anne Frank's (1929-1945) world famous diary charts two years of her life from 1942 to 1944, when her family were hiding in Amsterdam from German Nazis. The diary begins just before the family retreated into their 'Secret Annexe'.. Photography. Encyclopædia Britannica ImageQuest. Web. 8 Dec 2015. 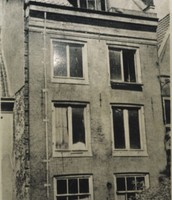