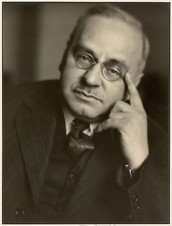 The Practice and Theory of Individual Psychology (1923)

Humans want to control their own life.

His best-known work is The Practice and Theory of Individual Psychology (1923). Adler had a tendency to change his theory on personality throughout his life but he ultimately believed that people are focused on maintaining control over their lives. He believed in single "drive" or motivating force behind our behavior, claiming that the desire we have to fulfill our potentials becomes closer and closer to our ideals.

Alder calls this theory Individual Psychology because he felt each person was unique and no previous theory applied to all people. Adler's theory included these four aspects: the development of personality, striving towards superiority, psychological health, and the unity of personality. Many psychologists excepted Alfred's popular idea of self-actualization.

Adler died of a heart attack while giving lectures at Aberdeen, Scotland.