The evidence for his birthdate is contradictory, but he was certainly very old when he died. He received the more important part of his training in the studio ofGiovanni Bellini, then came under the spell of Giorgione, with whom he had a close relationship. In 1506-08 he assisted him with the external fresco decoration of the Fondaco dei Tedeschi, Venice, and after Giorgione's early death in 1510 it fell to Titian to complete a number of his unfinished paintings. The authorship of certain works (some of them famous) is still disputed between them.Titian's first great commission was for three frescos in Padua (Scuola del Santo, 1511), noble and dignified paintings suggesting an almost central Italian firmness and monumentality. When he returned to Venice, Giorgione having died and Sebastiano gone to Rome, the aged Bellini alone stood between him and supremacy, and that only until 1516 when Bellini died and Titian became official painter to the Republic. Meanwhile he was gradually winning free from the stylistic domination of Giorgione and developing a manner of his own. Something of a fusion between Titian worldliness and Giorgione's poetry is seen in the enigmatic allegory known as Sacred and Profane Love (Villa Borghese, Rome, c. 1516).

This work inaugurated a brilliant period in Titian's creative career during which he produced splendid religious, mythological, and portrait paintings, original in conception and vivid with color and movement. A series of great altarpieces opens with the Assumption (Sta Maria dei Frari, Venice, 1516-18), which in the soaring movement of the Virgin, rising from the tempestuous group of Apostles towards the hovering figure of God the Father, contradicts the stable basis of quattrocento and High Renaissance composition and looks forward to the Baroque. The strong, simple colors used here, and the artist's evident pleasure in the silhouetting of dark forms against a light background, reappear throughout the work of this period. There followed the Pesaro altarpiece (Sta Maria dei Frari, Venice, 1519-26), a bold diagonal composition of great magnificence in which architectural motifs are used to enhance the drama of the scene, and the altarpiece of St Peter Martyr (now destroyed but known to us from several copies and engravings), where trees and figures together form a violent centrifugal composition suited to the action; Vasari described it as `the most celebrated, the greatest work... that Titian has ever done'. 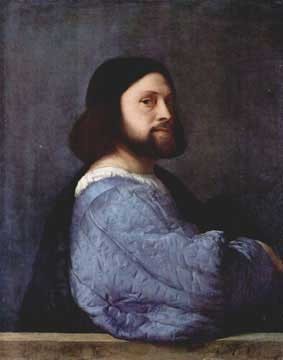 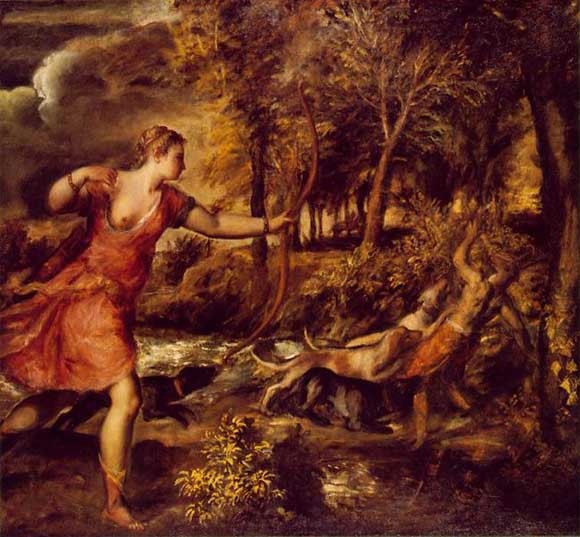 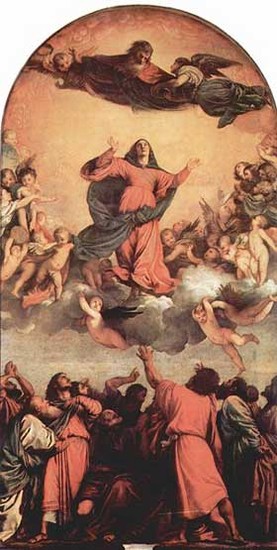