If you participated in our summer reading program, don’t forget to turn in your reading logs to your teacher or Ms. Knight today (September 4th)!

*Reminder for teachers: Each teacher that turns in a summer reading log will receive a jeans pass! Also, any teacher who can beat Ms. Knight's page total will be treated to a free dinner!*

News Team and Shelf Elf Applications due on Friday!

Attention 4th and 5th grade students! If you picked up applications to be on the News Team or to serve as a Shelf Elf, please turn those in by this Friday, September 7th.

News Team auditions will begin next week, and we will announce the new members of the News Team on Friday, September 14th.

Ms. Knight will post a list of all new Shelf Elves on Wednesday, September 12th. Those students can begin working during their next library visit.

If you have any questions about News Team or Shelf Elves, please see Ms. Knight.

Save the Date: The Fall Book Fair Is Coming Soon!

The Fork Shoals Library will have three book fairs again this year, and our first fair will be October 8-12 (with a special parent/teacher preview day on Friday, October 5th).

For more information on our upcoming bookfair, visit http://bookfairs.scholastic.com/homepage/forkshoalselemsch.

Book of the Week: Touch Blue by Cynthia Lord

Touch Blue by Cynthia Lord, a nominee for the 2012-13 South Carolina Children’s Book Award, is an amazing book. The main character, eleven-year-old Tess, has a perfectly realistic voice, and, even though some readers, especially in South Carolina, will be unable to relate to the setting of this book (an island off the coast of Maine), they will find a relatable character in Tess.

In order to keep their island school from closing–and losing many of the island’s inhabitants to the mainland–some of the residents of Bethsaida Island agree to take in foster children to increase enrollment at the school. Tess’ family is one of those taking in a new kid.

As Tess and her little sister Libby eagerly await the arrival of thirteen-year-old Aaron, Tess is filled with visions of what it will be like to have an older brother. She’s sure that it will be great, and she’s excited to have someone close to her age around. She’s not, however, prepared for the emotional baggage that Aaron brings with him. He’s justifiably moody and unsure of his new surroundings, and he resists all of Tess’ attempts to get closer to him.

Tess tries everything she can think of to help Aaron feel like he belongs, including a few things thought to bring good luck (like touching something blue to make a wish come true). Gradually, Aaron feels more comfortable on the island–he plays his trumpet in the July 4th celebration, he helps Tess restore her boat, and he goes lobster-trapping with Tess and her Dad–but Tess knows that he’s holding back. Aaron misses his mom, and he wants to get back to her. Tess tries to convince Aaron that he belongs with her family, but it may take something drastic to make him believe he’s important to them.

Will Tess be able to help Aaron accept his new life and family, or will all of her wishing leave her with nothing? Read Touch Blue by Cynthia Lord to find out. 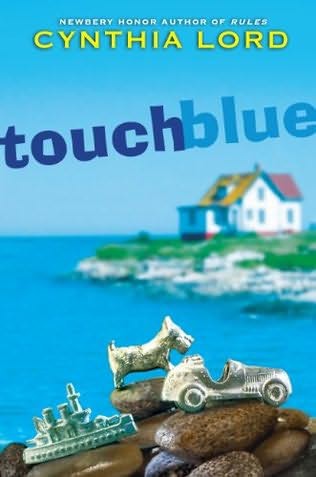 Follow Kelly Knight
Contact Kelly Knight
Embed code is for website/blog and not email. To embed your newsletter in a Mass Notification System, click HERE to see how or reach out to support@smore.com
close