Vijit is using Smore newsletters to spread the word online.

Get email updates from Vijit: 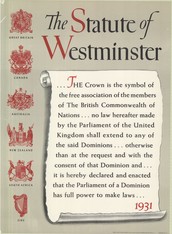 The Statute of Westminster, of 11 December 1931, was a British law clarifying the powers of Canada's Parliament and those of the other Commonwealth Dominions. It granted these former colonies full legal freedom except in those areas where they chose to remain subordinate to Britain. Yet some limitations remained. Canada was not fully prepared for complete independence. Government ministers were unable to agree upon a method which could be used to amend the Constitution, so it was decided that Britain would temporarily retain the power to do so. This remained in effect until the Constitution Act was passed in 1982.

For Canada, the road to independence started with this grant. Under the statue, Canada was granted full legal autonomy which meant :

-British Parliament can no longer make laws for Canada.

-Canada can modify or repeal past British-made legislation

The signing of the Statue of Westminster brought about plenty of changes that fundamentally changed the country we live in today.

By 1949, the Supreme Court of Canada had become the recognized arena of final appeal rather than the British Privy Council, due to the signing of the Statue. This completely changed the legal principles Canada stood on at that time, since now the British Privy Council could in no way interfere and rule judgments in matters related to the lives on Canadian citizens. As a result, all the cases were tried out and the final judgments were ruled out by the Supreme Court of Canada, which handed more power in the hands of Canada.

The gradual legitimization of the Supreme Court as the supreme judicial body in the country brought along various positive effects on our judicial system. In the early days, decisions of the Supreme Court tended to support the popular view to create a powerful central government. The Privy Council, however, held distinctly opposite views. Their decisions strongly reflected this view in their decisions which became increasingly unpopular. Being the more superior court at that time, the decisions of the Privy Council often neglected those made by the Supreme Court of Canada. As a result, many of these decisions had the result of striking down a number of reforms proposed by both the Conservative government as well as the Liberal government, despite public support.

Hence, due to the signing of the British law, reforms finally started taking place soon after the Supreme Court of Canada formally became the court of last resort for criminal appeals in 1933 and for all other appeals in 1949. These reforms even included the establishment of Canada's first foreign embassies in Washington DC.

This grant also gave Canada the power to decide whether it wanted to fight in the upcoming World War 2, which Canada participated as a 'voluntary' support to Britain 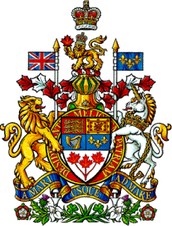 British North America Act, also called Constitution Act, 1867, was the act of Parliament of the United Kingdom by which three British colonies in North America - Nova Scotia, New Brunswick, and Canada were united as “one Dominion under the name of Canada”. The act served as Canada’s “constitution” until 1982 after which it was renamed as the 'Constitution Act'. Just like a constitution, the act established the new federation’s distribution of responsibilities and powers for each level of government and the rights of its inhabitants. It also divided the province of Canada into the provinces of Quebec, Nova Scotia, New Brunswick and Ontario. This legislation, passed by the British Parliament, created Canada as a new, domestically self-governing federation. The act, was both Canada’s greatest strength as well as its greatest challenge.

The BNA Act set out the rules for the government of the new federal nation. It established a British style parliament with a House of Commons and Senate, and set out the division of powers between the federal government and provincial governments. However, even after setting up a federal and several different provincial governments, according to the act the executive government and the authority of and over Canada was continued to be vested in the queen. Also, in order to aid and advise the government of Canada a council known as the 'British Privy Council' was established. As a result, the BNA act formed the base of Canada's constitution consisting laws varying from immigration and agricultural laws to criminal justice laws. It also contributed in the evolution of government funded national social welfare programs.

Patriation of the BNA Act/Constitutional Act

The Constitution Act, 1982 is a part of the Constitution of Canada. The act was introduced as part of Canada's process of patriating the constitution, introducing several amendments to the British North America Act, 1867. Both the Statute of Westminster (1931) and the Second World War (1939-1945) secured Canada's independence. However, Canada continued to retain its links to Great Britain, since its Constitution could only be modified by the British Parliament. Between 1960 and 1978, numerous negotiations were held between the provinces and the federal government to patriate The British North America Act. Finally, the signing of the Constitution Act took place in Ottawa on April 17, 1982.

The Constitutional Act made big changes in our constitution. First, it established four legal formulas or processes for amending the Constitution. Until 1982, there had never been any legal amending formula. For amendments to be passed they must go through the Senate and the House of Commons and by the legislatures of two-thirds of the provinces with at least half the total population of all the provinces (that is, the total population of Canada excluding the territories). This meant that any four provinces taken together could veto any such amendments.

This also marked the first time a charter of rights had been included in any Canadian constitutional document. Because of this, courts were given a much greater say in government and could now disallow legislation on the basis of violations against the Charter of Rights that neither Parliament nor any provincial legislature acting alone could change. This was a major leap for the Canadian justice system since it ensured the protection of every individuals basic rights and freedoms. It also:

- Made specific mention of Aboriginal rights.

- Included the "not withstanding clause," which allows a province to override the Charter of Rights.

- Set the rules for amending the Constitution.

Overall, the reform of the Canadian Constitution in 1982 has profound implications

as well. It helped Canada finally break all ties with Britain and come out as a completely independent nation even though, Canada has enjoyed effective independence from Great Britain since the Statute of Westminster. By making the constitution stronger than ever the Act tremendously affected Canadians who were now fully able to practice their rights and freedoms guaranteed in the Charter.

The rule of law is the building block on which the modern democratic society is founded. Laws are made for the welfare of the people to maintain harmony between the conflicting forces in society. One of the prime objects of making laws is to maintain law and order in society and develop a peaceful environment for the progress of the people. The concept of Rule of Law plays an important role in this process. The rule of law means that everyone is subject to the law; that no one, no matter how important or powerful, is above the law. It moderates the effects of power differences in society, by helping to prevent abuses of authority, violence and intimidation.

There are 3 main concepts of the Rule of Law :

The concept of this law is very old and is said to be originated in ancient Greece. The defeat of fascism and Nazi Germany propelled the establishment of universal standards of human rights and the rule of law through agreements such as the Universal Declaration of Human Rights, the Convention Against Genocide and the Convention Against Torture. The collapse of communism and the Soviet Union in 1989, the end of apartheid in South Africa in the early 1990s, and the collapse of Fascist regimes in Latin America further reinforced the rule of law as a universal principle.

A number of important historical events led to the development of the rule of law in Canada. These include: the Magna Carta, the Glorious Revolution and the enacting and repatriation of the Canadian Constitution. According to the Constitution Act, 1876 the rule of law is the supreme of the highest law in Canada. This law has immensely affected the way our Canadian judicial system works today. The rule of law has protected numerous citizens from abuses of power. Without it, powerful individuals or groups could take advantage of others by intimidating them with violence or other kinds of suffering in order to impose demands and restrictions upon them. In this way, the rule of law has helped us to secure our rights, liberties and equality.

Roncarelli v Duplessis is a Canadian case which illustrates the significance and function of the rule of law. This case took place in Québec during a time where there was immense tension between the dominant Roman Catholic Church and other religious groups. The complainant, Mr. Roncarelli, was a successful restaurant owner in Quebec and a very active member of the Jehovah’s Witness community. Mr. Roncarelli often helped Jehovah’s Witnesses who were arrested by posting their bail so that they could continue their lives outside of prison while awaiting trial. In fact, he did so more than 350 times in a three-year period. Many Catholic politicians and public officials were not happy with his involvement. As a result, the chief prosecutor contacted the Premier, Mr. Duplessis, to inform him about Mr. Roncarelli’s actions. Mr. Duplessis took it upon himself to contact the Québec Liquor Commission and had Mr. Roncarelli’s liquor license revoked. Mr. Roncarelli lost money and eventually had to sell his business. When he discovered why he had lost his liquor licence, Mr. Roncarelli brought court action against Mr. Duplessis suing him for damages. The Québec Court of Queen’s Bench decided in Mr. Roncarelli’s favour and ordered Mr. Duplessis to compensate Mr. Roncarelli. Mr. Duplessis appealed the decision to the Québec Court of Appeal, which overturned the lower court’s decision. Mr. Roncarelli then appealed that decision to the Supreme Court of Canada (SCC), which reinstated the original trial decision. In a majority decision, the SCC ruled that Mr. Duplessis wrongfully caused the revocation of Mr. Roncarelli’s liquor license and that it was outside of his jurisdiction as Premier to do so. The SCC also ruled that Mr. Duplessis, in his role as a Premier, was not entitled to diplomatic immunity and is not above the law.

Vijit is using Smore newsletters to spread the word online.