Mckenna is using Smore newsletters to spread the word online.

Get email updates from Mckenna:

How it Was Created

Volleyball was created on February 9, 1895, in Holyoke, Massachusetts. William G. Morgan, a YMCA physical education director created Mintonette, or volleyball. It was played preferably indoors with any number of players.

Influences from Other Games 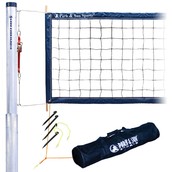 Some rules and regulations are the court has to be 30 feet wide and 60 feet long and any ball that hits the line is in. There has tone at least six people on the court, three people in the front and three people in the back. There is up to three contacts with no down le hits and they cannot catch the ball or carry the ball over the net. The play starts with a serve and they cannot touch or cross the serving line, if they do that, it is considered a foot fault and a point for the other team. Let serves are legal (if they hit the net and go over). Back row players cannot hit past the ten foot line jumping. The positions go one through six counterclockwise but rotate clockwise. Players cannot cross another plane of rotation until the ball goes over the net. The game is best two of three games and if the game is tied at 24-24 for game point, you have to win by two.

Variation of the Game

If there are less that four people you could shrink the court size to play half court and the attack line is the end line.There are three people on each side of the court with a setter. Losers go off and the next team comes on. The team coming on would serve to the winning side. To play this you would use a sheet or towel, it really depends on the size of team. It doesn't matter how big the team is. You use the towel or Sheetrock launch the water Solon over the net and the other team would try their best to catch the water balloon in the sheet or towel.The play stops if it hits the water and you need a special type of net.

Mckenna is using Smore newsletters to spread the word online.